What are primary colours?

What are primary colours?

In science, we are interested in how light of different colours combine to form other colours in the spectrum. It has been established scientifically that for the human eye, light of any colour can be produced by combining red, green and blue light of various intensities.

Use a magnifying glass and look closely at a colour TV. You will notice that the screen is filled with tiny red, green and blue rectangles. These rectangles are activated to various degrees so that they glow with varying brightness. The human eye blends them together, resulting in the different hues that we see. 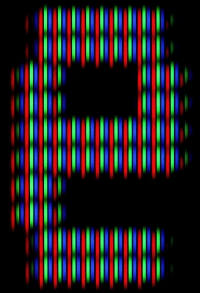 A closeup of the letter 'e' on TV screen.(Source: Wikipedia, photoed by Selcuk Oral)

In art, the primary colours are red, yellow and blue. To be exact, they should be magenta, yellow and cyan respectively. Here, we are dealing with pigments. A pigment or a coloured object absorbs all the light except the light of its own colour. Thus, a yellow object emits only yellow light and absorbs all other light.

Mixing various amounts of these three pigments produces all the colours you want on the palette.