An image offered by a citizen in connection with her enquiry of a special atmospheric optical phenomenon.

When Miss LAU Yim-ling, Nancy was on the way from Hong Kong to Hangzhou by airplane on 25 February 2011, she saw an interesting atmospheric optical phenomenon (outside the window) around an aeroplane at about 11a.m. and took a photo of the phenomenon as shown in Figure 1. She wrote to the Observatory inquiring about the phenomenon. At the time of her observation, extensive (relatively warmer) low clouds consisted of tiny water droplets appeared generally in the region between Hong Kong and Hangzhou (Fig.2)  After some analyses, I was able to provide Miss Lau with my explanation that this was "glory". It is now explained in further detail, together with supplementary illustrative diagrams, to our readers. 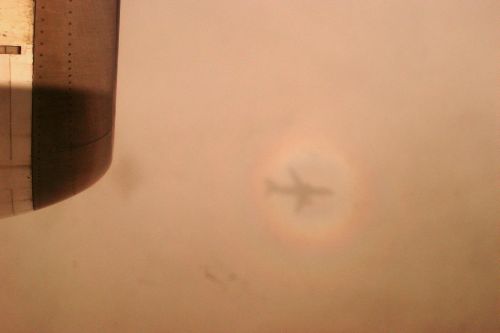 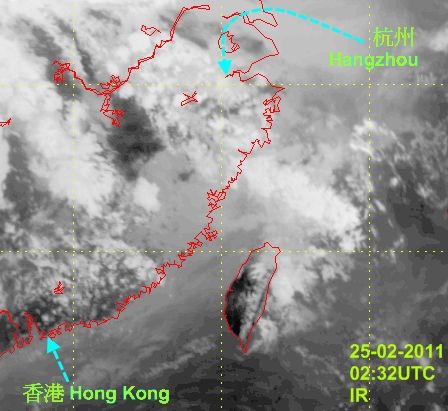 What special features are there in the photo?

The photo was taken by a passenger (Miss Lau) sitting onboard an aeroplane. In the photo, the shadow of the aeroplane on the clouds is tightly surrounded by a set of coloured concentric circular rings. The colours of the rings surrounding the aeroplane change gradually like a rainbow.

What is "glory"? Why is the phenomenon shown in the photo "glory"?

The backscattering (see section 7) of sunlight by water droplets in cloud causes the phenomenon of glory. Also, the colour of the rings is usually slightly faint. The size of the luminous rings is quite small. The colours of the rings are different and could repeat roughly in order for more rings extending outward. "Glory" is a set of small luminous rings of different colours appearing around the antisolar point (Fig.3) of the observer such that the sun, the observer and the observer's shadow inside the "glory" are simultaneously lying on a straight line. Therefore, the photo in Figure 1 revealed that the observer (Miss Lau) was sitting in front of the middle seats onboard the aeroplane (Fig.4). Later, Miss Lau also confirmed that this was her seat location onboard the aeroplane. Since the luminous rings surrounding the aeroplane have different colours in order and their size are small, the phenomenon is "glory".

Fig.4  The passenger sitting in front of the middle window seats onboard the aircraft, looking to the lower left, sees the shadow of the airplane tightly surrounded by glory.

Is "Glory" a rare phenomenon?

In the era of no airplane, sightings of glories were relatively rare. However, one who climbs up a mountain may also have the opportunity to see similar phenomenon. A mountaineer could sometimes observe glory with his shadow projected on fog or clouds when the sun shined from behind the mountaineer. When the sun is at relatively low altitude near the sunset or sunrise time, the shadow of the observer's lower half body could be enormously elongated and is thus apparently magnified. The observer's shadow, cast on fog or clouds and surrounded by a series of concentric coloured glowing rings of a glory, is called the Brocken Spectre (Fig.5). If there is more than one mountaineer, each one could see the shadows of other mountaineers. However, each mountaineer sees one glory only around the shadow of his own head as center of the glory and sees no other glory around the heads (as center of glory) of other mountaineers' shadows.

People may see the phenomenon when the weather and optical conditions are suitable. Air travel is common nowadays. A passenger, who sits by the window onboard an aeroplane, will have more opportunities to see the "glory" phenomenon (Fig.4). Actually this was the second time that Miss Lau saw the phenomenon.

Fig.5  The mountaineer could see the glory or a set of colored concentric circular rings surrounding the head of his shadow when he looks at the antisolar point with his back facing the sun. (The antisolar point is an imaginary point exactly opposite the sun, i.e. the shadow of the observer's head in this figure)

When an aircraft flies at high altitude encountering glory appearing on thick clouds of temperature below freezing level, it is a warning sign of potential aircraft icing. In such situation, glory could only occur and be visible if the clouds contain considerable amount of supercooled water droplets (water in liquid state) below freezing point. Upon touching an aircraft, the supercooled water droplets will freeze immediately on the aircraft surface. Therefore, an aircraft may experience icing if it flies into these upper-air clouds that produce a glory.

How are glories formed? What characteristics do glories have?

Glories are caused by backscattering (see section 7) of sunlight from droplets of water in clouds or fog and appear against the nearly white background of clouds or fog. Glories are brighter with multiple rings and high color purity when the size of the water droplets is very uniform. The slightly faint colours of the rings in a glory change in the order from red to orange, yellow, green, blue, and violet inward towards the center or the antisolar point. Surface tension ensures that small water droplets are spherical. The visual angular size of a specific ring is approximately inversely proportional to the size of water droplets. Philip Laven found that most glories are caused by spherical water droplets with radii between 4 and 25 µm. For droplets with radius being 10 µm, the innermost red ring appears at a radius of angular width of about 2.4 degrees from the antisolar point.  Stanley D. Gedzelman opined that glories are generally more distinct for cloud with droplets of about 10 µm in radius. When droplet radius increases, the glory shrinks and becomes less prominent.

Glory is complicated and not yet fully understood

Unlike rainbow, geometric optics could not provide explanation for the formation of glory. Glory can be simulated mathematically (by using either Mie theory or Debye theory) in a computer. However, the physical mechanism for the formation of glories is complicated and not yet fully understood. In 1947, the Dutch astronomer H.C. van de Hulst explained glory by suggesting the relatively abstract concept of surface waves (Fig.6) and using Huygens' wave theory of light. The diffraction and interference produced by the backscattered rays (Fig.7) from the opposite sides of each water droplet in cloud or fog caused the formation of glory. Although van de Hulst's explanation has been widely accepted, Philip Laven proposed a slightly different explanation in 2005 that the glory is the result of two-ray interference between two surface waves (Figures 8 and 9). 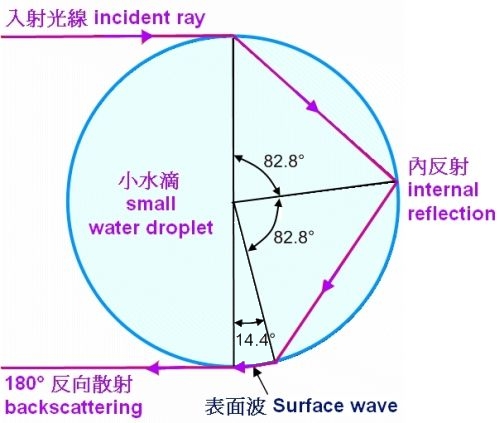 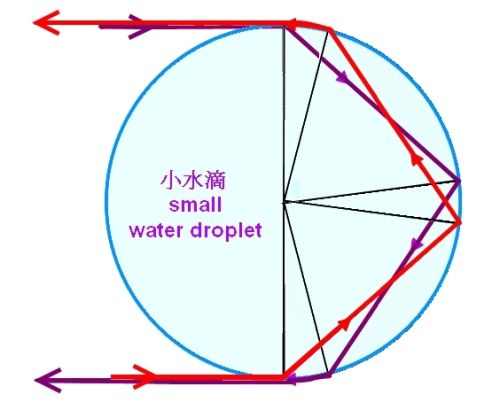 Fig.7  Backscattered rays come out from the opposite sides of each water droplet via surface waves proposed by van de Hulst. 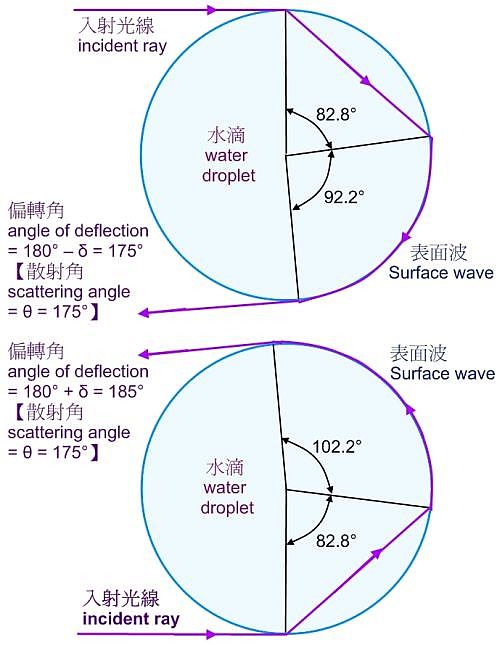