When taking a ferry, will you sit on the upper or lower deck? I like the lower deck because it is closer to the water where I can feel the cool breeze. When the journey ends, most passengers will go to the middle part of the deck, wait for the gangplank to be lowered and get off the ferry as soon as they can. However, have you ever seen the gangplank of the lower deck could not make it to the pier due to very low sea level? How can the passengers be put ashore then? The answer is to lay the upper deck gangplank onto the lower pier. If you were traveling by ferry in the evening of 4 July this year (2004), you might have experienced this amazing situation.

The sea level is affected by tides. In general, there are two high tides and two low tides each day. Tide variations are mainly caused by the gravitational attraction of the Moon and the Sun. Before and after the New Moon or Full Moon each month, the Earth, Moon and Sun are aligned along a straight line. The sea level will either be unusually high or unusually low. This is called a spring tide. During the First and Last Quarter Moon, the Earth, Moon and Sun are at right angles to each other. The rise and fall of water level are minimal. This is said to be a neap tide. On top of them, as both the Moons orbit and the revolution of the Earth follow an elliptical path, and because of the tilt of the Earths axis, the gravitational effects of the Moon and Sun tend to vary individually. When conditions are right, an intense spring tide may occur, such as the very low sea level on 4 July.

In addition to the gravitational forces of the Moon and the Sun, weather elements such as wind and air pressure also affect the sea level. In general, the sea level will rise by about 1 centimetre when the pressure drops by 1 hectopascal. Winds blowing from the sea will push water towards the coast, raising the water level. During the passage of a typhoon, the sea level will rise significantly due to the very low pressure and high winds near its centre, giving rise to a storm surge. A storm surge coincident with a spring tide may result in severe flooding. Storm surges associated with a typhoon in 1937 and Typhoon Wanda in 1962 caused severe flooding to extensive areas in the New Territories. The last flooding due to storm surge occurred during the passage of Typhoon Utor in 2001, when flooding affected Tai O in Lantau and the northwestern part of the New Territories. 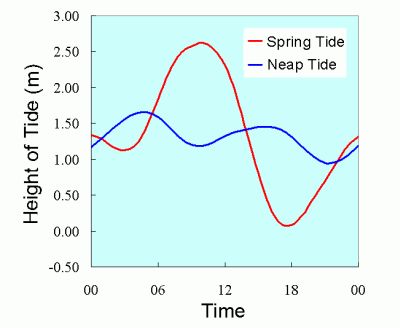 The water level in spring and neap tides