There is only one moon. But why are there two high tides and two low tides every day?

We know that gravitational attraction between two objects is stronger at closer distances. Thus, the moon exerts a larger attraction on the oceans on the side of the Earth closer to the moon than those on the far side. This 'flattens' the body of water on the Earth and results in two bulges of water, one higher bulge facing the moon and one lower bulge away from it (Figure 1). In Hong Kong, the bulges normally differ by about 1 metre only.

Figure 1: Two bulges of water on the Earth mainly due to the attraction of the moon.

Now add in the rotation of the Earth, which completes one rotation per day. Each location on Earth, e.g. Hong Kong, passes through the higher bulge and lower bulge every day. Thus we have two high tides per day (and in between them, two low tides of course!).

From the tide table, the two daily high tides are not exactly 12 hours apart. Why's that?

The two bulges move along with the moon because they are basically caused by the moon's attraction. While the Earth completes one rotation in exactly 24 hours, during this time the moon has got slightly ahead. The Earth has to rotate an extra 50 minutes to catch up with the moon. Thus the two high tides are roughly 12 hours and 25 minutes apart.

You did not mention the sun. As it is much bigger than the moon, should the sun have a greater attraction on the oceans?

The sun is 27 million times more massive than the moon, but is about 400 times further away. Let's re-visit Newton's law of gravitational attraction. Gravitational attraction increases in direct proportion with the mass but decreases in proportion to the square of the distance. It works out that the sun's gravitation affects the tides about half as strongly as the moon's. The sun's attraction, on top of the moon's, gives us such subtle effects as the spring tide and neap tide.

So what are spring tide and neap tide?

When the sun, moon and Earth are in a straight line ('new moon'), and in this order, the oceans will be unusually high because the sun's and moon's attraction are pulling along the same line of direction. The situation is the same for the other line-up, i.e. when the moon, Earth and sun are in a straight line ('full moon'). These are 'spring tides'. When the sun, moon and Earth are at right angles ('half moon'), the oceans rise and falls comparatively much less. In this case, we have 'neap tides'. 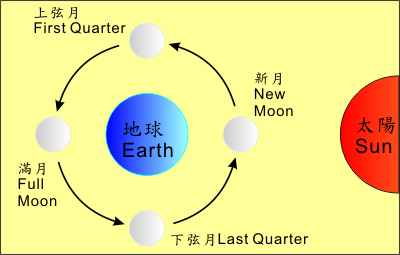 Are there other factors that affect the tides?