Hong Kong's climate is sub-tropical with different climatic characteristics throughout the year. For example, January and February are colder, July and August are hotter, June to August are rainier, while November and December are drier and less cloudy. Currently, the Hong Kong Observatory adopts "meteorological seasons" approach to divide the four seasons and provide climate data analysis and climate services in Hong Kong (e.g. seasonal predictions, trend analysis, ranking calculations, climate change studies, etc.). The definition of "meteorological seasons" refers to the partition of a year into four periods of roughly equal length (i.e. three months as a period). For the Northern Hemisphere, the warmest and coldest periods are respectively designated as Summer (June, July and August) and Winter (December, January and February), and the in-between periods as Autumn (September, October and November) and Spring (March, April and May). This definition is generally in line with the annual temperature cycle depicted by the 30-year (1981 - 2010) monthly mean temperatures in Hong Kong (Figure 1), i.e. June, July and August are usually the three hottest months, while December, January and February are the three coldest months in a year.

The merit of using "meteorological seasons" is that the length of the seasons and the start time of the seasons are generally unchanged. It will be simpler and more convenient for research analysis, results comparison and development of service products. It is also easier for the public and special users to understand and use relevant data and products. Major climate centres in the world, such as Beijing Climate Center, European Centre for Medium-Range Weather Forecasts, Japan Meteorological Agency, National Oceanic and Atmospheric Administration, also adopt "meteorological seasons" in climate monitoring and some of their climate services.

In addition to "meteorological seasons", some researchers and meteorological agencies also use different meteorological elements and indices to determine the "four seasons" and other specially defined seasons. For example, using running average of daily temperatures to determine the commencement date of the four seasons in a year, using rainfall amount to identify the beginning of the rainy season, and utilising the key features of the monsoon hydrologic cycle to assess the onset time of the monsoon seasons. This observational-based approach in defining seasons is generally more complicated and more commonly used for research purposes. Moreover, the start and end dates of a season as calculated by such approach usually vary significantly from year to year, and the same approach may not be directly applicable to different regions. 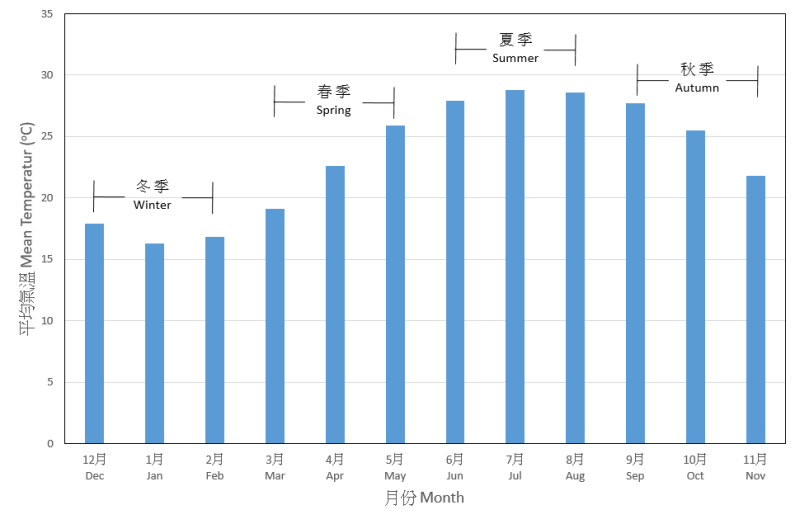