In 2007, the United Nations Intergovernmental Panel on Climate Change (IPCC) indicated in its Fourth Assessment Report that the observed global warming since the mid-20th century was very likely due to the observed increase in anthropogenic greenhouse gas concentrations. Carbon dioxide is a major greenhouse gas in the atmosphere. According to the latest information, the concentration of carbon dioxide nowadays is the highest among the past hundreds of thousands of years. The concentration of carbon dioxide has increased more than one third of that in the 18th century before the industrial revolution.

Apart from industry, power plants, cars and other human activities which emit carbon dioxide on the ground, aircraft in air will also emit carbon dioxide due to combustion of fossil fuels.  According to estimation of the aviation industry, a flying aircraft emits 49 kg of carbon dioxide per minute on average. Hence, a long haul flight travelling 12 hours will emit a total of 35 tonnes of carbon dioxide. Although the carbon dioxide produced by the aviation industry currently contributes only two to three percent of the total global greenhouse gas emissions, with the growth of air traffic in the future, the aviation industry is already aware of the need to tackle the challenge of climate change early. World Meteorological Organization, International Civil Aviation Organization and the aviation industry are now working together. Apart from conducting research on using more environmental-friendly fuel as well as more efficient and low emission aircraft engines, ways are being explored to provide more accurate and precise aviation weather forecast to facilitate air traffic control to use the flight paths and air space more effectively to reduce flight diversions and holding of aircraft due to severe weather conditions.  This will help to reduce fuel consumption and carbon dioxide emissions.

Currently, weather information are provided to air traffic controllers, pilots and airlines mainly through highly-condensed text messages using special codes like the Aerodrome Forecast (TAF) (Figure 1). TAF only covers aerodrome area (within around 8 km). Such weather codes were developed back in the mid-20th century due to the then limitations in international data transmission. In recent years, the demand for weather services for aviation has increased, in particular more precise and accurate forecast is demanded for larger terminal areas (commonly up to hundreds of kilometres), which are not covered by the scope of the existing Aerodrome Forecast.

Figure 1: TAF is a description of the meteorological elements expected at an airport for a forecast period.

Severe weather impacting airport and aircraft in flight is becoming increasingly important.  For example, if the flight path (especially the arrival and departure corridors near the airport) or the designated areas which aircraft wait for their turn to land (also known as "holding point") is affected by thunderstorms, aircraft may need to be diverted to other airports or to circle in the air for considerable time if the flight path has not been adjusted earlier. With increasing number of flights, the effect of severe weather conditions on flight management increases and may have serious impact on the air traffic. Severe weather not only cause delay of flight schedule, but also increase flight time of aircraft, which means more fuel consumption and carbon dioxide emission as well as an increase of cost for airlines.

In Hong Kong, the Observatory in cooperation with the Civil Aviation Department is developing new aviation weather forecasting services to provide more specific forecast of thunderstorms over the airspace near the airport (in particular the flight paths and the holding points). The services would facilitate air traffic controllers to reschedule flight routes early to reduce diversion of aircrafts and waiting time of aircraft circling in the air.  This, in turn, helps to reduce fuel consumption and carbon dioxide emissions.

Internationally, the Observatory has participated in the work of an Expert Team of the World Meteorological Organization to enhance the provision of aviation weather information. We have obtained the support of the aviation industry on the development strategy of fostering terminal weather services to meet the needs to increase the efficiency of air traffic management in the 21th century, thereby reducing fuel consumption and carbon dioxide emissions. In addition to the development of significant convection forecast near the terminal region, research are being conducted on provision of information on weather conditions impacting flight safety and flight efficiency, such as icing, turbulence, high-altitude wind and temperature forecast.

All in all, no matter whether you live in the city or countryside, are on ground or in the air, climate change affects every one of us and is a serious challenge for this and the future generations.  Cooperation among different sectors, governments and the public is needed. The aviation industry and meteorological community have already taken part in the carbon reduction action. We hope that the carbon reduction can gain wider support from all over the society. Let's work together to create a better future for our earth and for our next generations! 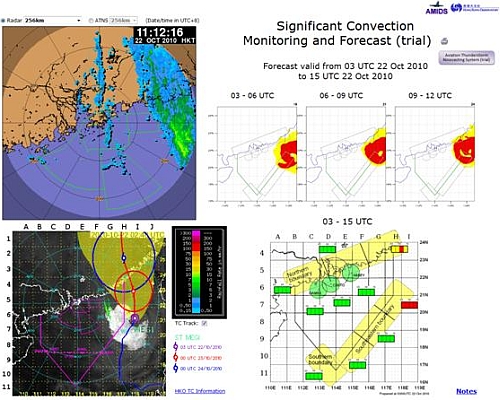