What is Carbon Cycle?

What is Carbon Cycle?

Carbon is the building block of life.  It is the basic element of all organic substances, from fossil fuel to DNA.  Carbon cycle is a biogeochemical cycle in which carbon is continuously exchanged and recycled among several natural reservoirs, including atmosphere, ocean, terrestrial biosphere, rocks and fossil fuels, where carbon is stored.

CO2 is also exchanged continuously between the ocean and the atmosphere.  This exchange is largely controlled by sea surface temperatures, ocean acidity, circulating currents and the biological processes of photosynthesis and respiration by marine plants and animals.  Cold ocean waters favour the uptake of CO2 from the atmosphere.  In winter, cold waters at high latitudes, heavy and enriched with dissolved CO2, sink from the surface layer to deep ocean (see "What is thermohaline circulation?").  Upward moving currents in the tropics bring dissolved CO2 up from the depth to the surface ocean and release the gas back to the atmosphere.  Ocean plants and animals also contribute to the exchange of CO2 through photosynthesis and respiration.  Some of the carbon-rich dead organisms will sink to the bottom of the ocean and form layers of limestone sediment on the ocean floor, resulting in   removal of carbon from the atmosphere.  Ocean acidity acts in the way that an acidified ocean will have less ability to hold more CO2.  However, the pH value and the buffering capacity of the ocean can be restored by dissolution of limestone (calcium carbonates).  These processes have various time scales, ranging from decades to millennia.

In an even longer time scale, CO2 and water together will form carbonic acid which can dissolve calcium or magnesium from rocks to form insoluble carbonates.  CO2 and rain water can also react with limestone to form soluble calcium bicarbonates over millions of years, a process called weathering.  Insoluble carbonates will eventually be washed into the ocean and settle on the ocean floor.  Those soluble calcium bicarbonates will also precipitate out from the ocean water and form layers of sediment.  The cycle continues as these layers of sediment are drawn into Earths mantle by subduction of tectonic plates.  Eventually, carbon will be released back to the atmosphere by volcanic activities.

In an unperturbed natural carbon cycle, these exchanges between reservoirs are approximately in balance.  In fact, the atmospheric concentration of CO2 had been relatively stable between 260 to 280 ppm for 10,000 years before the industrial revolution.  Human activities such as burning of fossil fuels, deforestation and land use changes have perturbed the global carbon cycle since then.  To understand the fate of the fossil-fuel CO2 released in the atmosphere, scientists use models of global carbon cycling  for investigation.  It is found that although the ocean plays a key role in absorbing this greenhouse gas, a substantial portion of CO2 will stay in the atmosphere, awaiting much slower removal processes like weathering and deposition of sediment on the ocean floor.  Figure 2 shows the global carbon cycle for the 1990's.  According to the IPCC's Fourth Assessment Report, 50% of the additional CO2 in the atmosphere will be removed within 30 years, a further 30% will be removed in a few centuries and the remaining 20% may remain in the atmosphere for many thousands of years.  In other words, the climatic effect brought by the leftover CO2 will also persist for such a long period of time. 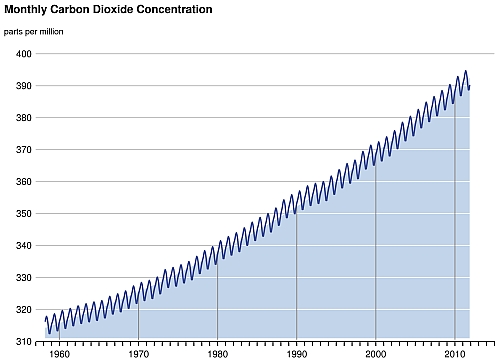 Fig.1   Monthly atmospheric concentrations of CO2 measured at Manua Loa Observatory, Hawaii. The seasonal cycle of CO2 is superimposed on the long-term growth of CO2 due to human activities. (Source: Scripps Institution of Oceanography, US) 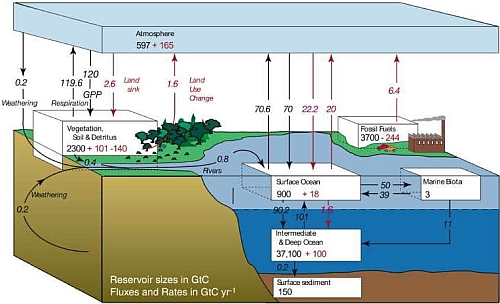