Where is the coldest place in Hong Kong on average? Why?

Where is the coldest place in Hong Kong on average? Why?

We know that air temperature varies in different seasons and at different time of the day, and its variation depends on a number of factors such as cloudiness. Yet if we put these factors aside and simply look at the yearly average, do you know where in Hong Kong is the coldest? The answer can be found in the Observatory's "Regional Climate of Hong Kong" web page. Figure 1 depicts the average annual air temperature of Hong Kong at different locations. We can see that the average annual temperature recorded by the automatic weather station at Tai Mo Shan is about 6°C lower than most other places. Besides, average temperatures at Ngong Ping and The Peak are also significantly lower. What do these places have in common that make them so special? 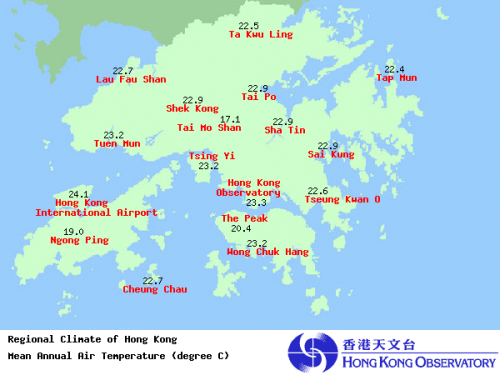 You should have realized that the automatic weather stations at Tai Mo Shan, Ngong Ping and The Peak are all located near hilltop (with altitudes of 955m, 593m and 406m respectively). As explained in the article "The higher you climb, the colder it gets", temperatures at higher locations are generally lower than those below. This is because air mostly does not absorb sensible heat directly from the sun. Instead, the ground first absorbs the solar energy and is heated up. The ground in turn heats up the air just above it. The air becomes warmer and lighter, and moves up in the atmosphere. In this way, energy from the sun is transferred from the ground upwards. However, you may then ask the following question: "We all know that air keeps flowing and warm air tends to rise. When the warm air is transported from the ground to the hilltop, why doesn't the air temperature at hilltop become close to that on the ground level?"

To answer this question, one should first know that the air pressure decreases with height (see "Introduction to Air Pressure" for details). When we are taking an elevator in a skyscraper, we may sense discomfort in our ears. This is because our eardrums feel the drop in air pressure as we move up. When hot air is raised from the ground to a higher level, it will expand as the surrounding air pressure is lower. It is a physical phenomenon that as air expands, its temperature drops.  In this way, the air reaching a higher level will be at a lower temperature than that of the air near the ground (Figure 2). 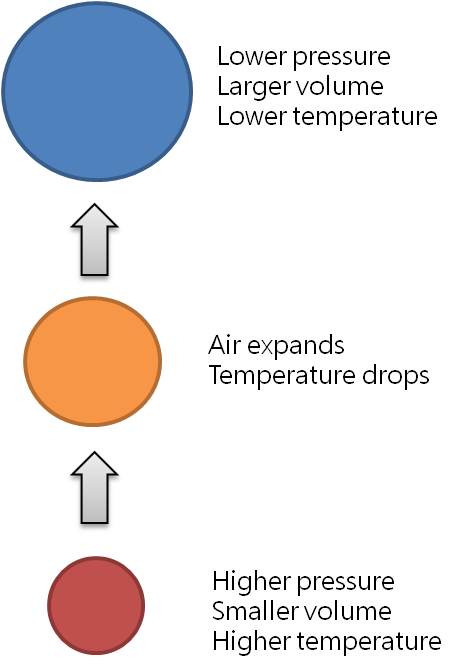 In everyday life, you may have experienced the opposite phenomenon, namely, increase in air pressure results in higher temperature. If you try to pump a bike tire, you are sending in air into the tire making the pressure inside the tire increase. After you finish pump, try to feel the temperature of the tire. You should feel that the tire has become warmer.

Therefore, even if warm air near the ground rises to the hill, the drop in pressure would cause the air to expand and cool down. As a result, temperatures on the hilltop are lower than those on the ground most of the time.