Is the Melting of Glaciers in West Antarctica Unstoppable?

Is the Melting of Glaciers in West Antarctica Unstoppable?

In May 2014, scientists claimed that the glacier loss in the Amundsen Sea sector of West Antarctica had passed the point of no return (see blog Point of No Return), implying that the glaciers would eventually melt away.

The glaciers of concern sit on bedrock lying below sea level and flow towards the ocean across the grounding line, at which point they become floating ice shelf over the sea water. Using satellite data over the past two decades, researchers found that the grounding lines of the glaciers were all retreating inland rapidly, probably caused by warmer ocean currents under the floating ice. With the glacier beds below sea level and sloping downward in the inland direction, the more the grounding line retreats, the more vulnerable the ice becomes to the erosive effect caused by the incursion of warm ocean currents. Normally, ice outflow to the ocean increases with ice thickness at the grounding line. Here, the ice thickness at the grounding line increases as the latter continues to retreat, implying more ice outflow to the ocean. The only way to stop the vicious cycle of retreating grounding line and melting glaciers is to have some high obstructions rising from the bedrock at some point, which is exactly the natural blockage currently lacking in the landscape of West Antarctica. 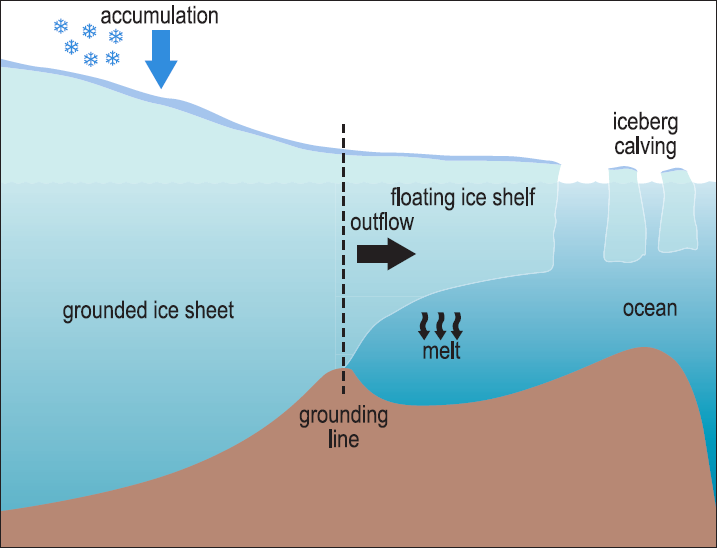