Can the warming of the 20th century be explained by natural factors?

Can the warming of the 20th century be explained by natural factors?

Through a question and answer approach, the Climate Change FAQs will explain some basic knowledge and facts of climate change in layman terms in order to enhance the public's understanding of the causes of climate change, its impacts and what we can do to mitigate its effects.

Q. Can the warming of the 20th century be explained by natural factors?

Recent satellite observations confirmed solar irradiance has an 11-year cycle related to sunspots. However, there is no increasing trend in solar irradiance in the last few decades, while global temperatures have increased significantly. Therefore, solar activity is not the main cause of the climate warming in the 20th century. Actually since the Industrial Revolution, increased manmade greenhouse gases have far more impact on the climate change than the variation of the Sun's irradiance.

Volcanic eruptions eject large amount of dust and suspended particulates high into the atmosphere, temporarily shielding the Earth, reflecting sunlight back to space. This will decrease the solar energy received by the Earth's surface, causing short-term climate cooling.

The Earth's orbital variation brings itself closer or further away from the sun in periods of hundreds of thousands of years, which could be related to the past ice-ages and very-long-term changes in the climate. However, they do not have much impact on the climate change observed over the centennial time scale in the past century.

Climate models cannot reproduce the warming observed in recent decades when only natural factors are considered. According to model simulation, we should have observed a decreasing trend in the global average temperature in the last few decades if only natural factors are considered, but we have observed a significant increasing trend in the global temperature. On the other hand, models can simulate the observed temperature changes in the 20th century when human factors, such as greenhouse gas emissions, are included. Therefore, it is very unlikely that the 20th century warming can be explained only by natural causes. Climate modeling results show that most of the global warming observed over the last 50 years is very likely due to human activities. 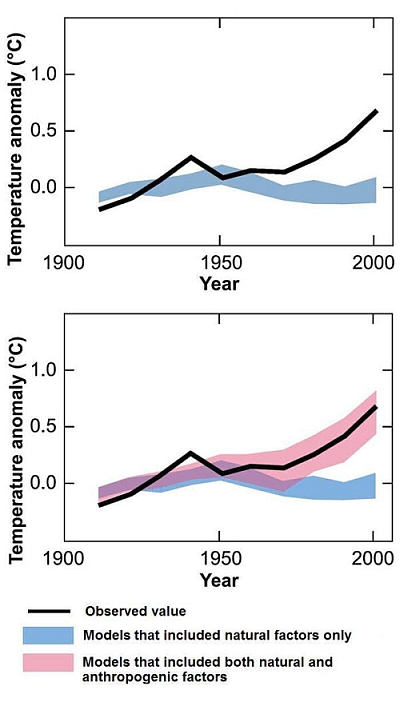