Just before the arrival of the Year of the Tiger (in early February 2010) when people from all over China packed the public transportation homeward for the new year reunion, there were severe snowstorms in many Chinese provinces including Shanxi, Hebei, Henan, Shandong, etc., causing 24 highways to be closed to traffic.  Across the Pacific Ocean, Washington, D.C. recorded a new record for snowfall in December 2009, paralyzing the city for a few days.  Many people living in the mid-latitudes complained of the bitter cold weather and snow not seen in many years.  So, is global warming giving way to global cooling?  Well, not quite. 2009 still ranks as one of the hottest 10 years on record globally.  So, how can we explain this paradox?

First of all, it must be emphasized that global warming is about the long term trend of rising temperature for the earth as a whole.  So, it should never be mixed up with one or two individual weather events occurring in a certain part of the earth. 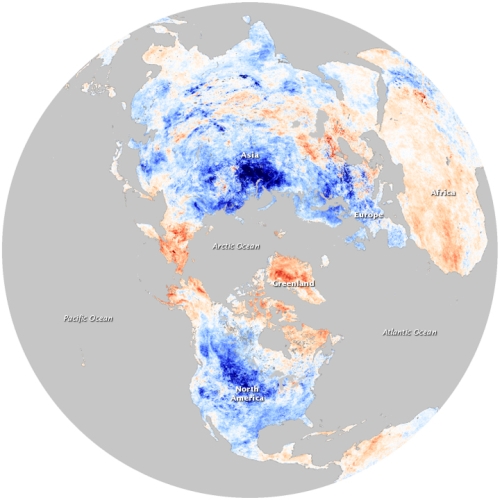 While the mid-latitudes and the sub-tropical regions might experience colder/cooler weather, the earth as a whole had not got colder.  Since global warming is about rise of temperature for the entire earth, there is actually no contradiction between the cold weather we experienced recently and global warming.  A vivid explanation about artic oscillation is also available in the YouTube video (in Chinese) produced by the Hong Kong Observatory.

As for the second question - is heavy snowfall inconsistent with global warming, one has to understand that it requires two things to create heavy snowfall: moist air and cold air.  There is plenty of cold air in some areas because of the present state of Arctic oscillation.  But where does the moist air come from?  One obvious source is of course the ocean.  This winter, the entire South China Sea and the East China Sea are much warmer than usual, as clearly depicted in the NASA sea surface temperature map below: 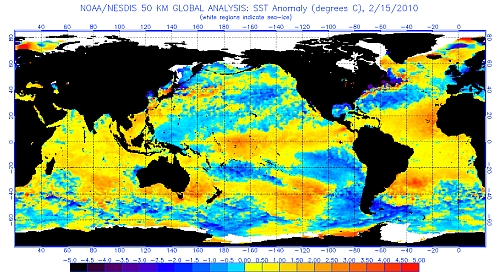 Here, red again represents warmer-than-usual sea water and vice versa for blue.  The warm seas provide moist air that rides over the denser and colder air, giving rise to snow in the mid-latitudes and rain in the south, like Hong Kong.  No wonder it was always rainy weather whenever cold air reached Hong Kong this winter.

This condition is not only consistent with global warming, but it is likely to occur more frequently in some places because of global warming.  The ocean has a long memory.  The warming of the atmosphere produced by human activities will reside in the memory of the ocean for a much longer time.  Nowadays, on average, the oceans are warmer than they were decades ago.  So, chances are that in winter in the future, we can expect the warm oceans to feed warm moist air to the continent more frequently, waiting for the burst of cold air from the north to create the snowstorms that many places witnessed these past couple of months.