The basic driving force of the southwest monsoon is the large-scale differential heating between landmasses and oceans. Starting from April, the Sun gradually moves north and the amount of sunshine will increase in the northern hemisphere. The Asian continent will be heated up faster than its neighboring oceans. As air over the land becomes lighter and rises, a low pressure center will eventually form over the continent. The relatively warm and moist air from the ocean will then in general flow towards this low pressure centre, thus leading to the onset of the southwest monsoon. Fig. 1 shows the monthly mean of prevailing wind direction at Waglan Island between 1971-2000. It clearly indicates that the prevailing wind direction in Hong Kong veers from easterlies to southwesterlies between May and June.

The end of the fog season

The fog season in Hong Kong usually begins in February and ends in April. When warm moist maritime air moves over the relatively cool sea surface near the coast, air temperature will gradually fall to the dew point. Water vapour in the air will condense into very small water droplets which lead to the formation of fog (this is commonly called advection fog). Since the air is warmer than the sea water underneath, the atmosphere is relatively stable and helps confine the water vapour to the lowest level of the atmosphere. As the season proceeds, the sea water will also warm up gradually such that the atmosphere over the ocean will become more unstable. Hence, the onset of the southwest monsoon often marks the end of the fog season. Climatology shows that the Observatory rarely observes fog in May, on average less than 0.2 day in that month (Fig. 2). 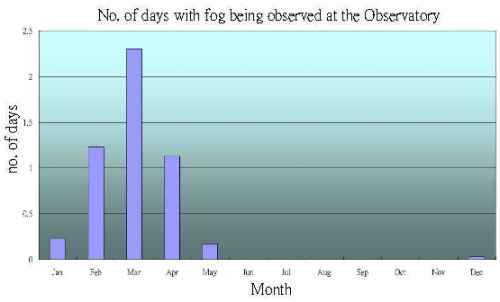 The start of the rain season

The southwest monsoon will bring in warm moist air and the warming up of sea water will fuel the development of convective activities. Coupling with other favorable meteorological conditions like low level convergence or upper level divergence, the southwest monsoon could sometimes lead to heavy rain. Climatology shows that the amount of rainfall increases significantly in May (Fig. 3). This correlates well with the onset of the southwest monsoon. 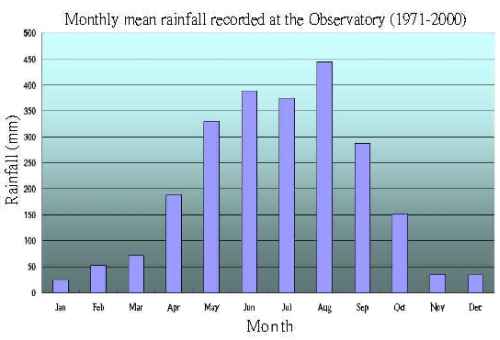