Response to Strike of Tsunami

Response to Strike of Tsunami

Hong Kong is an international financial centre. Many people would only think of the stock or property market when talking about earthquakes and tsunamis. It seems that a genuine tsunami will only occur at distant places or in disaster movies. However, will you not be affected by earthquakes and tsunamis at all? How would you protect yourself at the strike of tsunami if you are travelling in a place with a high risk of earthquake and tsunami?

Most earthquakes in the world occur on the tectonic plate boundaries where energy released from time to time by friction and movement between plates will propagate out in the form of seismic waves. Not only will a strong submarine earthquake cause ground shaking, it may also trigger tsunami. When a major tsunami hits the coastal areas, sea level will rise rapidly, followed by huge waves like a water wall. It should be noted that the sea may retreat quickly as a precursor before the arrival of the tsunami. The strike of violent tsunami waves will hit and even destroy the coastal infrastructures. Floating debris like wreckage of ships and vehicles will also be damaging, causing great harm to life and property. 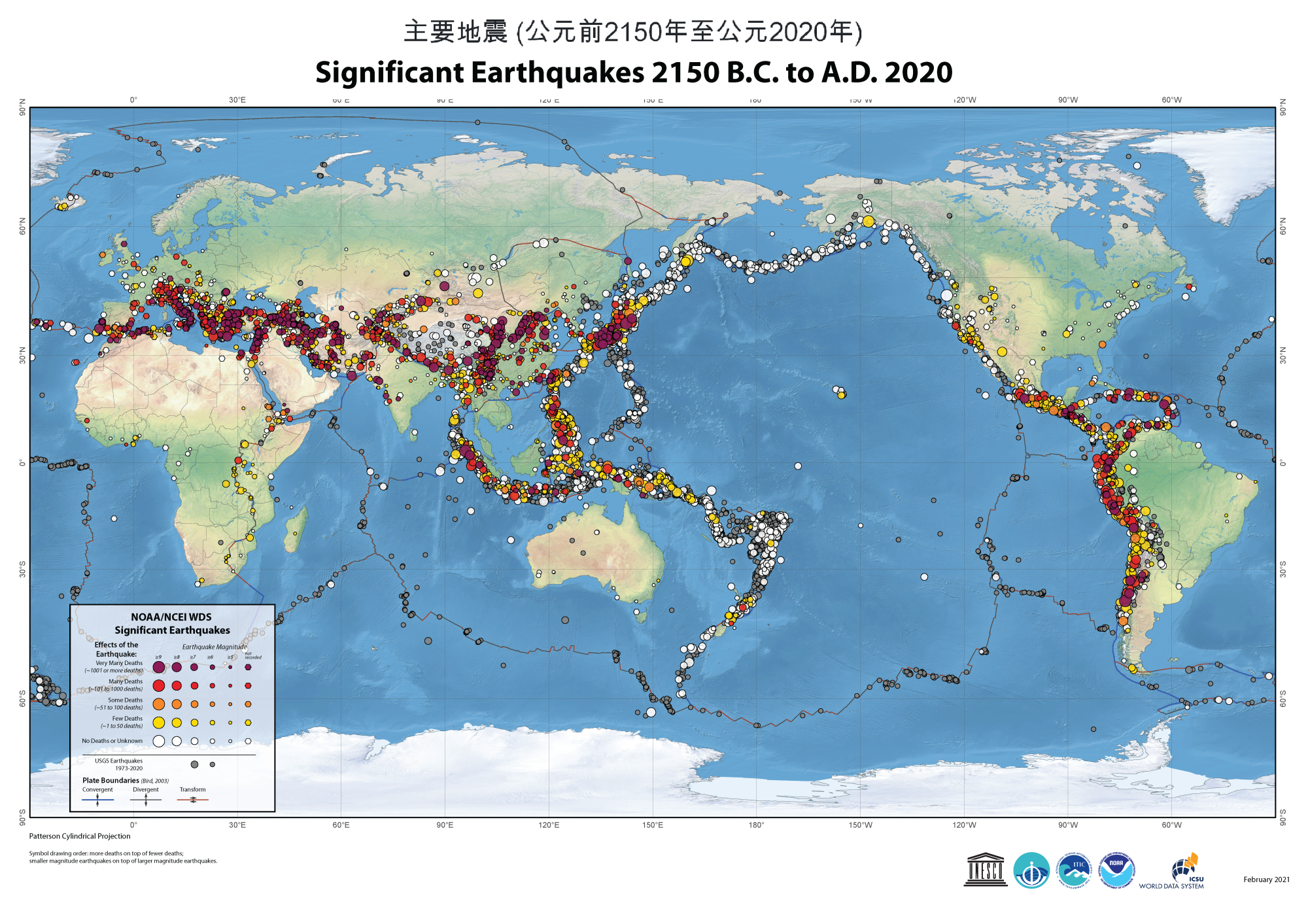 
Located more than 600 kilometres away from the circum-Pacific seismic belt, Hong Kong is not in an active seismic zone (Figure 1). Also, Taiwan and the Philippines serve as natural barriers, so that tsunami waves generated by strong earthquakes that occur in the Pacific would only cause limited sea level rise in Hong Kong. Sea level rises brought by tsunamis as recorded by the Hong Kong Observatory have never exceeded 0.3 meters since 1952. That said, tsunami risk faced by Hong Kong mainly comes from the South China Sea. In particular, major earthquakes can occur in the Manila Trench to the west of Luzon. The severe tsunami waves thus triggered can reach Hong Kong in about 3 hours. Fortunately, in the past 100 years or so, the strongest earthquake that occurred in the Manila Trench was one with a magnitude of 7.6 in 1934. Hong Kong also felt the tremor at that time but did not receive any tsunami reports. In fact, there is no record of a destructive tsunami ever occurred in Hong Kong, and the felt tremor events recorded since 1905 have not caused any casualties.

An effective earthquake monitoring system will earn us time to deal with approaching tsunamis. When a tsunami occurs, please pay attention to the tsunami warnings issued by local authorities. Leave the shore, beach, or low-lying coastal areas as soon as possible and evacuate to inland areas for at least two kilometres or go to high ground for temporary shelter. If there is not enough time to evacuate or traffic conditions do not permit, you can get up to the upper floors of a reinforced concrete multi-storey building for temporary shelter until the tsunami warning is cancelled.

Established by China, the “South China Sea Tsunami Advisory Centre” of the Intergovernmental Oceanic Commission of the United Nations Educational, Scientific and Cultural Organization (IOC-UNESCO) has been operational since November 2019. The Centre provides round-the-clock tsunami monitoring and advisory services for countries and territories around the South China Sea. The Observatory also operates a local seismograph network to monitor seismic activities in Hong Kong and neighboring areas. If Hong Kong is expected to be affected by a significant tsunami, i.e. water level rising by 0.5 metres or more above the normal tide, and the tsunami is forecast to reach Hong Kong within three hours, the Observatory will issue a Tsunami Warning to remind the public to take preventive measures. Please refer to “Tsunami Monitoring and Warning in Hong Kong” for details.

In conclusion, Hong Kong’s geographical location is far from active seismic zones and abnormal rise in water levels caused by tsunamis in the past have been limited. The risk of Hong Kong being hit by a major earthquake or tsunami is not high. That said, the footprints of Hong Kong people cover the whole world, including areas of high earthquake and tsunami risks such as Japan and Indonesia. Everyone should get prepared for danger in times of peace and know how to deal with disasters. In fact, major tsunamis did occur in the past two decades, including the Japanese tsunami in 2011 and the South Asian Tsunami in 2004 (Figures 2 and 3). If you wish to teach children how to deal with disasters associated with earthquakes and tsunamis, you may make reference to the "Earthquake!" and "Get Up to High Ground" of the COPE Disaster Book Series, a set of illustrated books for children published by the United Nations Office for Disaster Risk Reduction. The Chinese version can be viewed on the website of the Hong Kong Jockey Club Disaster Preparedness and Response Institute. 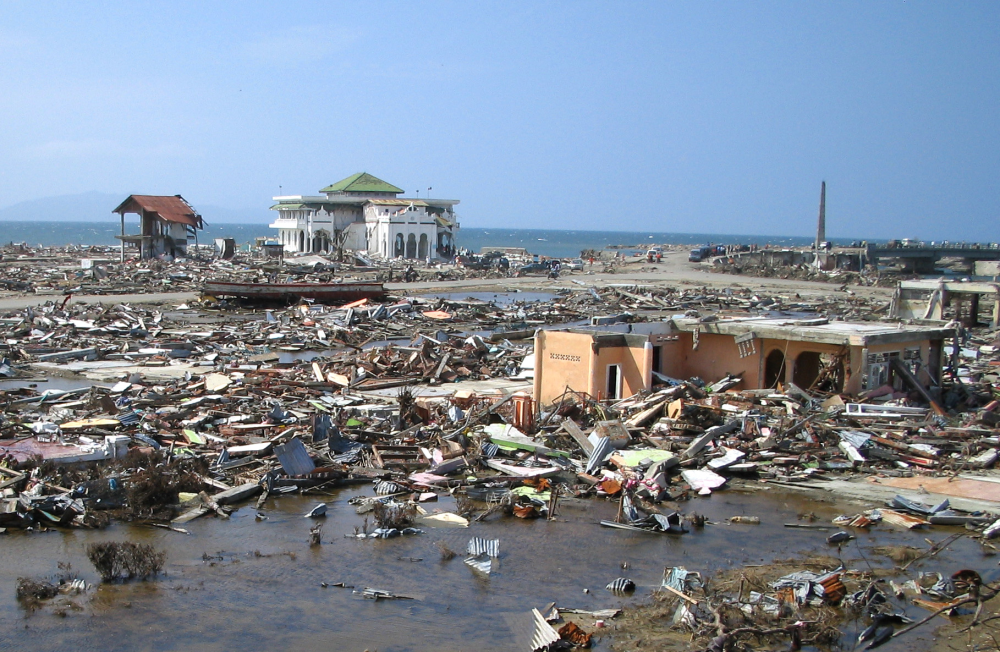 Figure 2   On 26 December 2004, a major earthquake near Sumatra, Indonesia triggered a tsunami (commonly known as the “South Asian Tsunami”) and destroyed the nearby Banda Aceh city. After the tsunami, only a few buildings were left. (Source: International Tsunami Information Center) 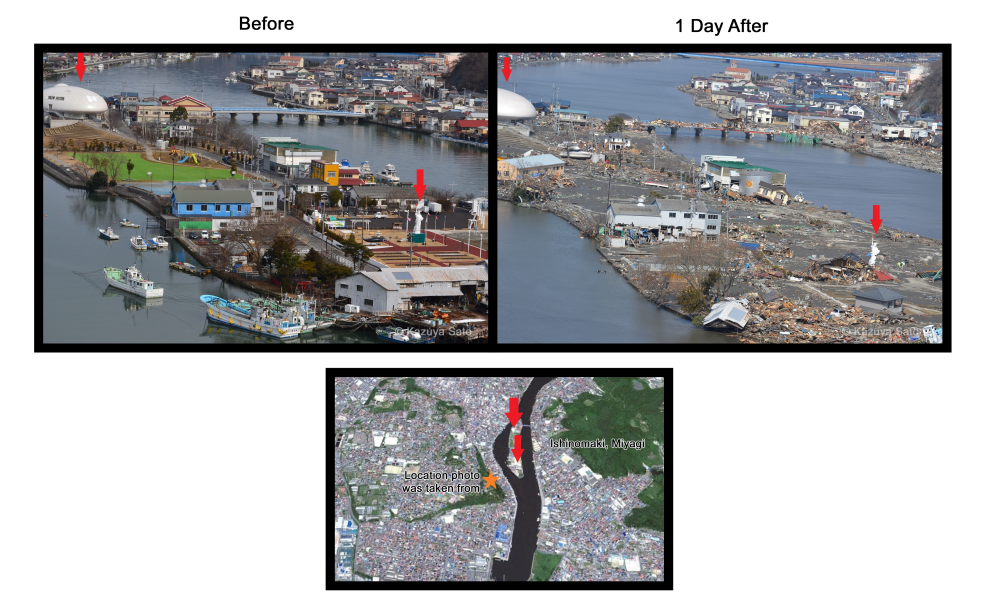 Figure 3  The Great East Japan Earthquake on 11 March 2011 caused a tsunami. The sea water washed away the Ishinomori Manga Museum and Ishinomaki Orthodox Church in Ishinomaki City, Miyagi Prefecture (red arrow indicates the location on the map before and after the tsunami).
(Source: International Tsunami Information Center)