Hong Kong is facing the South China Sea and is exposed to the threat of possible calamity inflicted by the sea during the approach of tropical cyclones.  While most people realize such dangers during the close approach of typhoons, it may not be so clear to them that a distant tropical cyclone several hundred kilometers away can bring about swells to Hong Kong.  These swells may drag people near the shore line out to the sea.

The force of winds causes motion of sea surface.  Waves are raised by winds blowing locally, the stronger the winds, the higher the waves.  Swells are caused by winds far away.  The winds far away generate waves in that distant area.  When these waves propagate to reach one's location, they are called swells.

Huge waves are usually whipped up by high winds associated with tropical cyclones. For a distant tropical cyclone, its waves may travel towards Hong Kong to become swells (Figure 1).  These swells travel at speeds much faster than the movement of tropical cyclones.  When a tropical cyclone is a few hundred kilometers away, local weather may be deceptively fine with light winds.  However, severe swells generated by the tropical cyclone could have already reached the coastal areas, often catching people by surprise.  When the swells enter shallow waters, their heights would increase.  The Chinese saying that "three feet wave in no wind" really has its scientific backing.  These swells can pose hazards to people staying close to the shoreline or engaging in fishing or water sports.  There have been occasions in the past that these swells cause casualties in Hong Kong.  One recent example was a university student being dragged to the sea in Tai Long Sai Wan when Typhoon Ketsana traversed the South China Sea at more than 700 kilometers away from Hong Kong (Figure 2).

In future, even if a tropical cyclone is located several hundred kilometers away, beware of the possible swells that it can bring to Hong Kong and be extra careful if you really need to engage in activities close to the shore line. 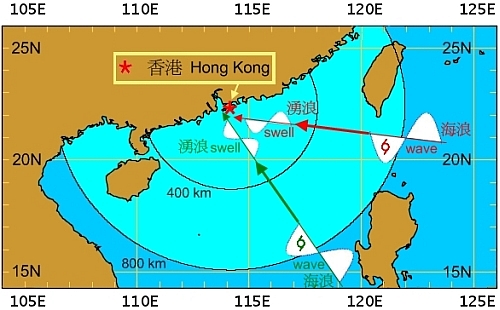 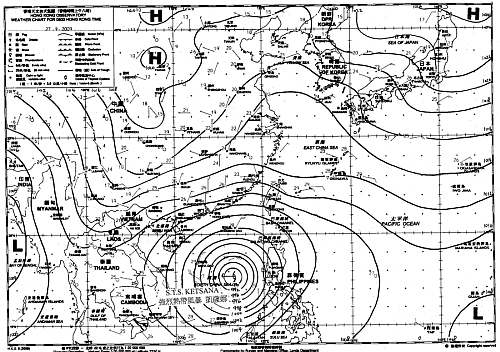 Figure 2.  Weather map of 27 September 2009, showing Typhoon Ketsana over the South China Sea at more than 700 kilometers away from Hong Kong.