Threat to aviation by volcanic ash has become better known after two volcanic ash incidents reported by Boeing 747 airplanes flying over Indonesia and Alaska in 1982 and 1989 respectively. Fortunately, both airplanes recovered from power loss and landed safely despite the heavy damages in the jet engines.

Volcanic eruption ejects a large amount of mixture of pulverized rocks, minerals, crystals and glass particles, collectively called volcanic ash, to the atmosphere. If an airplane flies into the volcanic ash clouds, the ash particles would melt and fuse on the turbine blades. This could interrupt the airflow, thereby reduce the engine performance. In severe cases, the build-up of molten ash particles could lead to engine flame-out. The pitot-static system, which determines the airspeed of an airplane, is also prone to malfunction as volcanic ash blocks the sensors. Pilots are therefore trained to avoid observed or predicted volcanic ash plumes.

On 13 August 2021, the eruption of Fukutoku-Oka-no-Ba, an underwater volcano in the Ogasawara Islands of Japan, pushed a significant amount of steam and volcanic ash to the upper air of height exceeding 50,000 feet. The volcanic ash plumes were then driven westward by the easterly winds aloft. As Fukutoku-Oka-no-Ba is situated more than 2,700 kilometres from Hong Kong, the eruption did not pose any immediate risk to our vicinity. However, the ash plumes subsequently spread further downwind towards the northern part of South China Sea.

The Observatory’s Airport Meteorological Office (AMO) actively monitored the dispersion of the volcanic ash plumes using satellite data as well as closely communicated with neighbouring Meteorological Watch Offices (MWOs). The plumes reached Hong Kong Flight Information Region (HKFIR) on 14 August, posing threats to flights within the area. Before the ash plumes reached HKFIR, AMO forecasters issued Significant Meteorological Information (SIGMET) messages detailing the expected location and altitude of ash clouds to warn flight operations according to the International Civil Aviation Organization (ICAO) regulations. This volcanic ash event within the HKFIR was the first in the past thirty years since the eruption of Mount Pinatubo in the Philippines back in 1991 which warranted the issuance of SIGMET message by HKO. 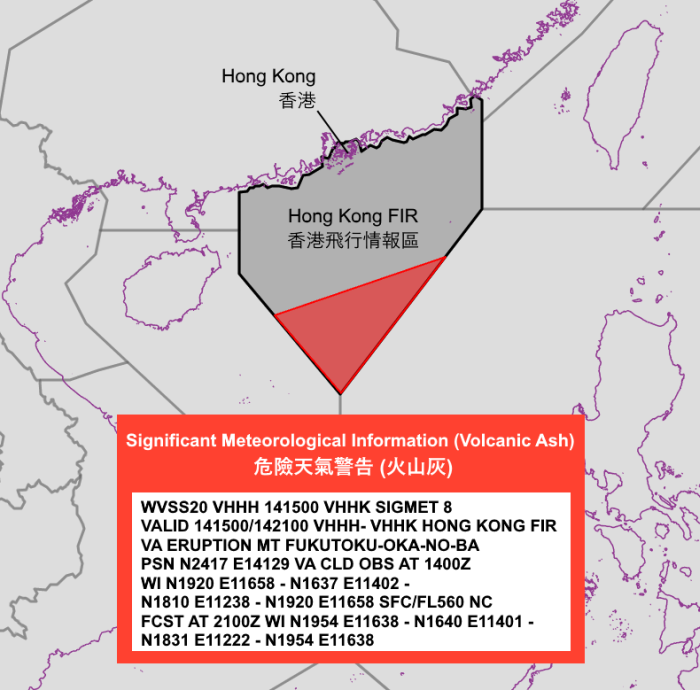 Figure 1 An example of volcanic ash SIGMET message issued by the Observatory. 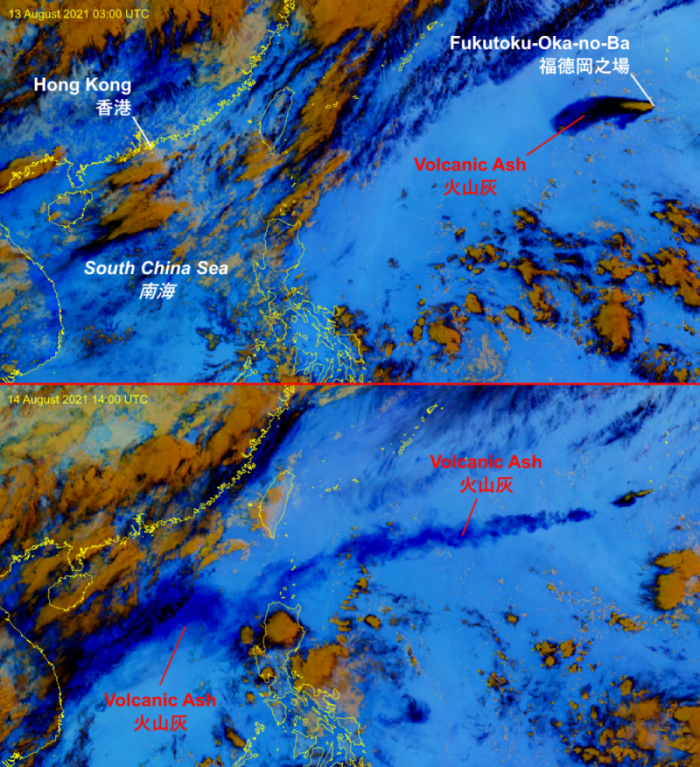 Figure 2 Himawari-8 satellite image at 03:00 UTC (11 a.m. HKT) on 13 August 2021 capturing the volcanic ash plumes from Fukutoku-Oka-no-Ba about 6 hours after initial eruption (top) and the corresponding image at 14:00 UTC (10 p.m. HKT) UTC on 14 August 2021 (around 41 hours since eruption) showing the dispersed ash plumes over the South China Sea and the western North Pacific (bottom)