According to the Observatory's statistics, about 1 in 500 flights landing at or departing from the Hong Kong International Airport (HKIA) reported encountering significant windshear, whereas about 1 in 2,500 flights reported encountering significant turbulence. The majority of significant windshear events at HKIA could be associated with terrain disruption of airflow (Figure 1), which occurs predominantly in the late Spring season. As HKIA is located just north of the Lantau Island, winds blowing across the Lantau mountains from the east or southeast would become disturbed by terrain and might bring about significant windshear or turbulence downstream. 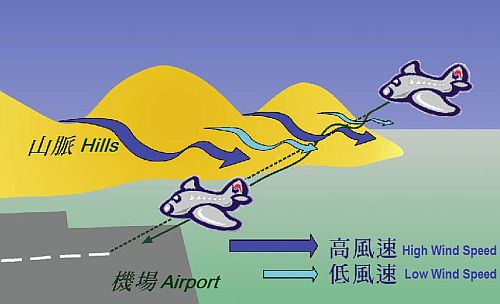 Figure 1   Schematic diagram of terrain-induced windshear. The presence of terrain will lead to faster airstreams across the gaps and slower wind speeds directly behind the mountain. An aircraft flying through the region will experience sudden changes in headwind and hence windshear.

A significant terrain-induced windshear episode recently occurred on 5 March 2015 (Figure 2). The arrival of an intense northeast monsoon resulted in 64 reports of significant windshear by landing/departing aircraft at HKIA, the highest number received by the Observatory within a day in recent years under non-tropical cyclone situations. As revealed by the Observatory's LIDAR scans in the afternoon of 5 March, the fresh-to-strong easterly winds near the surface gradually veered to southeasterly with height, leading to highly-disrupted airflow immediately to the west of HKIA downstream of the mountains (Figure 3). An aircraft landing from the west (which was the direction in use on the day) would experience sharp changes in wind speed/direction before touch-down and hence could be expected to encounter significant windshear. 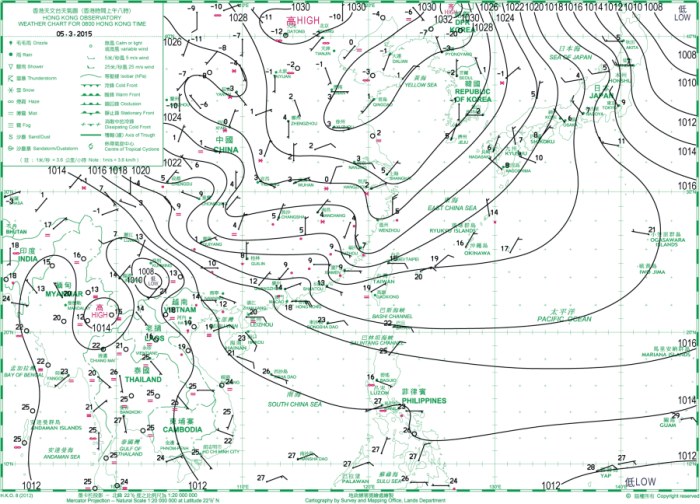 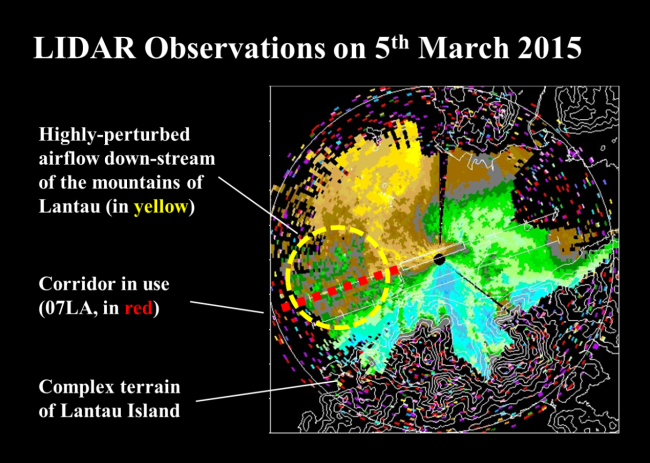 Figure 3   Terrain-induced windshear features (circled by yellow dotted lines) over the western corridors of HKIA in the afternoon of 5 March 2015 as revealed by the Observatory's LIDAR scan.

While all 64 encounters were successfully covered by the Observatory's windshear and turbulence alerting service (Figure 4), a number of affected aircraft had to initiate go-around or even diversion to neighbouring airports. The episode highlighted the potential impact of low-level windshear and turbulence to aviation operations and the importance of their timely detection and alerting using advanced remote-sensing equipment. 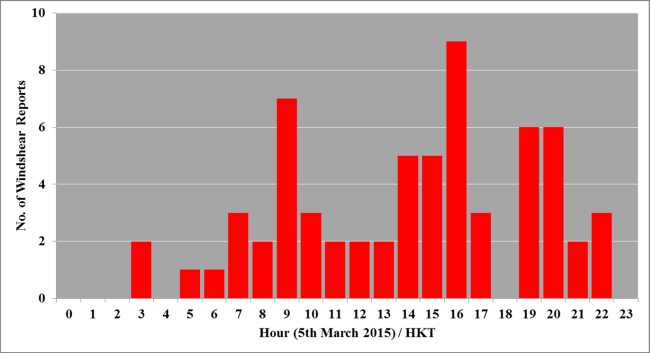