The Observatory currently uses a suite of meteorological instruments, including the long-range Light Detection And Ranging (LIDAR) systems, for windshear alerting at the Hong Kong International Airport (HKIA). The instruments are useful in detecting windshear associated with terrain and thunderstorms. However, for windshear/turbulence which have even smaller spatial scales, such as those associated with buildings/man-made structures, it would be beneficial to employ meteorological instruments with even higher resolutions. For this purpose,in the last few summers, the Observatory has arranged the field study of a short-range LIDAR (SRL) on the rooftop of AsiaWorld-Expo to test the possibility of enhancing windshear alerting over the eastern arrival runway corridor of the north runway (i.e. 25RA runway corridor). Compared to the existing long-range LIDARs, SRL has a spatial resolution improved by about 29% (105 m of long-range LIDAR vs. 75 m of SRL) and temporal resolution improved by 83% (120 seconds of long-range LIDAR vs. 20 seconds of SRL). 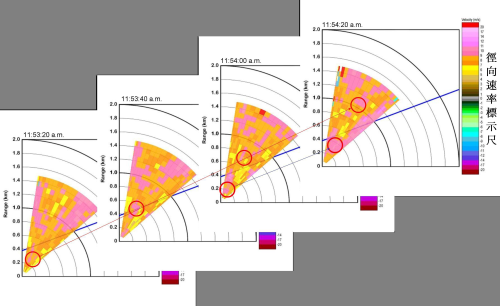 Figure  1 Windshear features (encircled) as captured by SRL on 22 June 2012. The flight path is indicated by a blue line on each figure. The coloured pixels refer to line-of-sight velocities measured by SRL,with the legend shown on the right hand side of the last figure of the series. There was a windshear report at 11:54 a.m. on that day over 25RA, indicating headwind gain of 15 knots at a height of 150 m.  The event was missed by WTWS.

During the field study, the Observatory had tried different algorithms to alert windshear using the SRL. Based on the study results of the past 4 summers, the use of SRL could improve the hit of windshear by about 11% based on pilot reports (hitting 214 reports out of a total of 240 reports with the use of SRL, compared to the hitting of 193 reports by the Observatory's Windshear and Turbulence Warning System (WTWS) alone). At the same time, the  total alert duration is increased only by a comparable amount of 13%. Moreover, SRL has demonstrated the capability of capturing some windshear features that could not be seen by the existing instruments of WTWS. An example of windshear event captured by SRL but missed by WTWS is shown in the figure. The Observatory is considering the cost-benefit of permanent deployment of a SRL at HKIA.