Corals are of high value to ecosystems and human. Coral reefs provide food and habitat for marine creatures, supporting the associated ecosystems. Coral reef structure along the coastal waters buffers against the threat of high waves whipped up by winds and storms, protecting the lives and property of coastal communities. However, climate change caused by human activities has brought about a double whammy to corals.

Human activities have released a large amount of greenhouse gases into the atmosphere, enhancing the greenhouse effect and trapping extra heat on the Earth. About 90 percent of the extra heat has been absorbed by the oceans, leading to ocean warming which, in turn, causing coral bleaching. The colours of corals originate from the symbiotic algae living in the coral structure. As sea water warms, corals tend to reject the symbiotic algae and turn themselves white. Since the major food source for corals comes from the photosynthesis products generated by the symbiotic algae, bleaching corals will become fragile and more vulnerable to diseases, and may even ultimately lead to their demise.

Besides, about 25 percent of the carbon dioxide emitted by human activities has been taken up by the oceans, leading to ocean acidification. The carbonate ions in more acidic sea water will be reduced, seriously affecting the calcification process and skeletal growth of corals.

The World Meteorological Organization announced that the atmospheric concentration of carbon dioxide had soared to 403.3 ppm in 2016, the highest level in the last 800,000 years. With an unabated increase in greenhouse gases, global warming continues. The average frequency of coral bleaching events has increased by four times in the past 40 years. According to the assessment of the United Nations Educational, Scientific and Cultural Organization, all World Heritage coral reefs are likely to disappear by 2100 unless there is a drastic reduction in carbon dioxide emission. 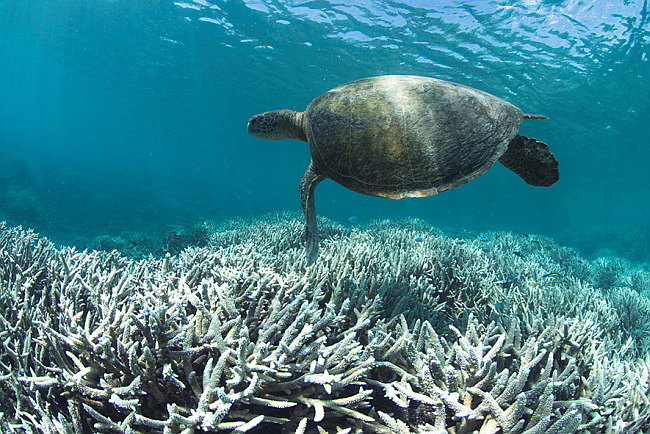