What is Greenhouse Effect ?

Fig. 1   A simplified diagram illustrating the global long-term radiative balance of the atmosphere. Net input of solar radiation (240 Wm-2) must be balanced by net output of infrared radiation. About a third (103 Wm-2) of incoming solar radiation is reflected and the remainder is mostly absorbed by the surface. Outgoing infrared radiation is absorbed by greenhouse gases and by clouds keeping the surface about 33 warmer than it would otherwise be.

The major greenhouse gases in the atmosphere are carbon dioxide (CO2), methane, (CH4), nitrous oxide (N2O), chlorofluorocarbons (CFCs) and ozone (O3). Atmospheric water vapour (H2O) also makes a large contribution to the natural greenhouse effect but it is thought that its presence is not directly affected by human activity. Characteristics of some of the greenhouse gases are shown in Table 1.

Different greenhouse gases exert different effects on the Earth's energy balance. In order to assist policymakers to measure the impact of various greenhouse gases on global warming, the concept of Global Warming Potentials (GWPs) was introduced by the Intergovernmental Panel on Climate Change (IPCC) in its 1990 report. GWP reflects the relative strength of individual greenhouse gas with respect to its impact on global warming. It was defined as the cumulative radiative forcing* between the present and some future time caused by a unit mass of greenhouse gas emitted now, expressed relative to CO2. The GWPs developed by IPCC for a number of greenhouse gases are shown in Table 2.

Global Warming Potentials take into account the differing atmospheric lifetimes and abilities of various gases to absorb radiation. Derivations of GWPs requires knowledge of the fate of the emitted gas (typically not well understood) and the radiative forcing due to the amount remaining in the atmosphere (reasonably well understood). Hence, GWPs encompass certain uncertainty, typically + 35% relative to CO2 reference.

High-quality observations of the concentration of CO2 began in 1958, with flask measurements at the Mauna Loa Observatory in Hawaii. Fig. 2 shows that the average annual concentration of CO2 in the atmosphere has risen from about 315 ppmv (part per million by volume) in 1958 to around 363 ppmv in 1997. There is a clear annual cycle in the Mauna Loa data that corresponds to the annual cycle of plant respiration in the Northern Hemisphere : CO2 concentration increase during the Fall and Winter and decline during Spring and Summer. This cycle, follows the growth and die back of vegetation, is reversed and of smaller amplitude in the Southern Hemisphere, and disappears almost entirely in the data measured near the Equator. 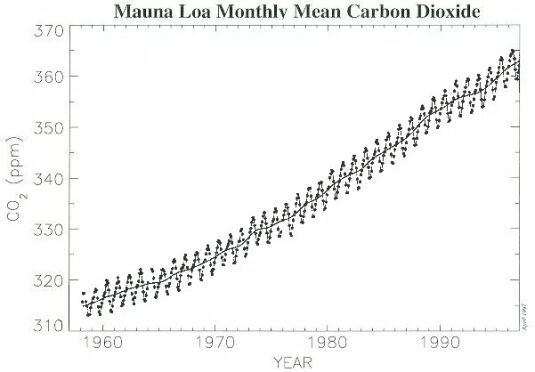 The rate of increase of the atmospheric abundance of methane has declined over the last decade, slowing dramatically in 1991 to 1992, though with an apparent increase in the growth rate in late 1993 (Fig. 3). The average trend over 1980 to 1990 is about 13 ppbv/year (part per billion by volume/year). 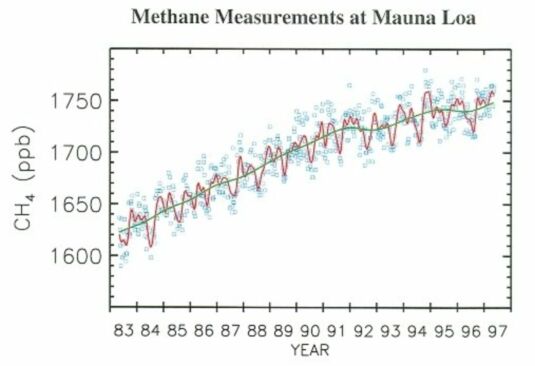 Over the last four decades, the average growth rate of N2O is about 0.25%/year (Fig. 4). Current tropospheric concentration of N2O is around 312 to 314 ppbv. 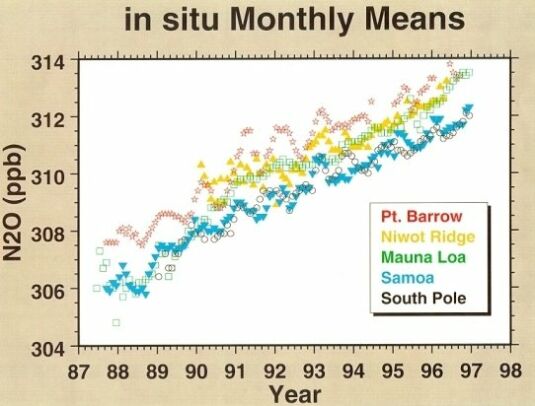 Among the family compounds of chlorocarbons, CFCl3 (CFC-11) and CF2Cl2 (CFC-12) are receiving more attention because of their larger concentrations and potentially significant effects on stratospheric ozone. CFC-11 and CFC-12 have the highest concentrations of the man-made chlorocarbons, around 0.27 and 0.55 ppbv, respectively (measured at Mauna Loa in 1997, Fig. 5 & 6). As indicated in their GWP values, these two gases are strong infrared absorbers. It is thought that CFC-11 and CFC-12 have contributed about one-third of the radiative forcing of gases other than CO2 during the 1980s. 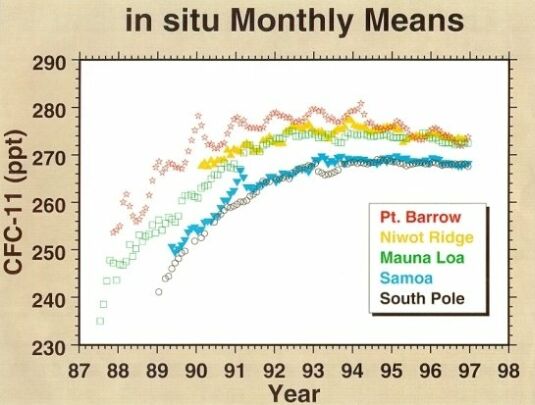 Over half of the human population lives within 100 kilometres of the sea. Most of this population lives in urban areas that serve as seaports. A measurable rise in sea level will have a severe economic impact on low-lying coastal areas and islands, for examples, increasing the beach erosion rates along coastlines, rising sea level displacing fresh groundwater for a substantial distance inland.

Experiments have shown that with higher concentrations of CO2, plants can grow bigger and faster. However, the effect of global warming may affect the atmospheric general circulation and thus altering the global precipitation pattern as well as changing the soil moisture contents over various continents. Since it is unclear how global warming will affect climate on a regional or local scale, the probable effects on the biosphere remains uncertain.

The loss of coastal wetlands could certainly reduce fish populations, especially shellfish. Increased salinity in estuaries could reduce the abundance of freshwater species but could increase the presence of marine species. However, the full impact on marine species is not known.

Global precipitation is likely to increase. However, it is not known how regional rainfall patterns will change. Some regions may have more rainfall, while others may have less. Furthermore, higher temperatures would probably increase evaporation. These changes would probably create new stresses for many water management systems.

Characteristics of some major greenhouse gases

Global Warming Potentials (GWPs) following the instantaneous injection of 1 Kg of each Greenhouse gas, relative to 1 Kg of CO2
(Based on Intergovernmental Panel on Climate Change Third Assessment Report, 2001)