As the year 2012 approached its end, the World Meteorological Organization (WMO), in late November, issued a press release on its provisional annual statement on the state of the global climate [1]. According to WMO's analysis, the first ten months of 2012 is the ninth warmest period of January-October since records began in 1850. While the memories of heat waves in the Northern Hemisphere and the record low of Arctic sea ice this year are still fresh to most of us, climate skeptics claimed that the Earth has not warmed for the past 16 years based on monthly temperature data, a very misleading statement and a cherry-picking tactic of deliberately focusing on short-term fluctuations while ignoring the long-term trend in climate change. 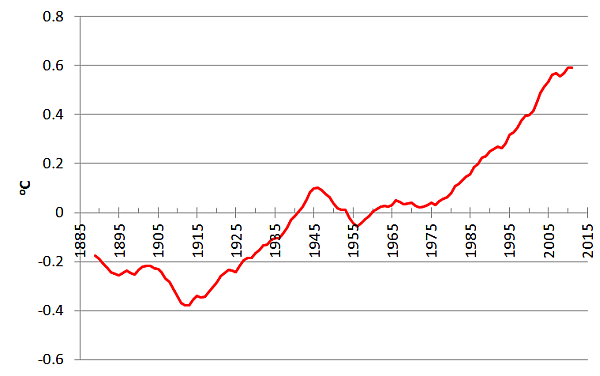 In climate change studies, one way to examine the long-term trend is averaging the data over a relatively long period of time for short-term fluctuations to cancel out. Let us take the data provided by the US National Climate Data Center (NCDC) for illustration. Figure 1 shows the decadal global surface temperature anomaly. The rising trend in recent decades cannot be more clear. Figure 2a shows the monthly global surface temperature anomaly. Fluctuations between months can be large but the overall rising trend is still discernible. However, if we selectively focus on the fluctuations within a short period of time, e.g. Figure 2b and 2c, the depicted trend could be zero or even decreasing. 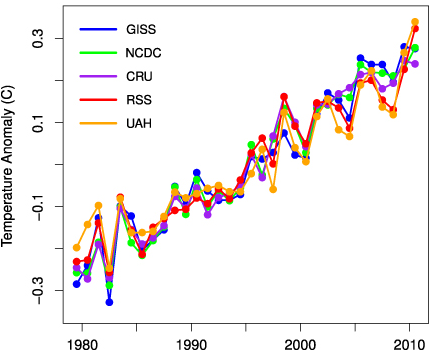 The manifestation of global warming is not just rising air temperature. The oceans warm as well. We need to recognize a very important fact: the oceans are much more capable of storing heat energy than the atmosphere. About 90 percent of the heat trapped by greenhouse gases on the Earth is stored in the oceans (Figure 4), and there is no doubt that the global ocean heat content has been rising for the past few decades (Figure 5). 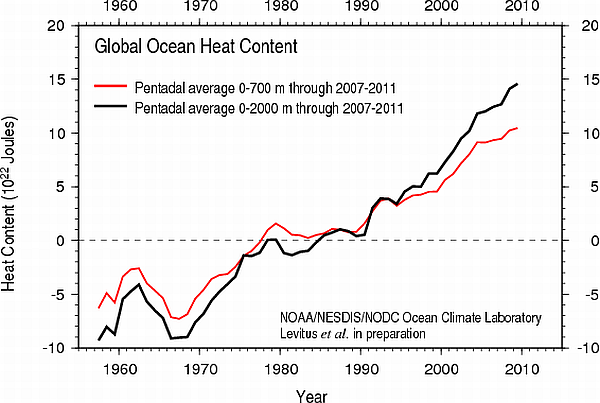 In November 2012, the World Bank published a report entitled "Turn Down the Heat: Why a 4oC Warmer World Must be Avoided" [2], pointing out that the impacts of climate change have already emerged and outlining a range of risks and impacts associated with a 4oC warmer world (relative to the pre-industrial climate): unprecedented heat waves, severe droughts, floods, food security under threat, shortage of water resource, impacts on ecosystems, etc. The report highlighted that if the current mitigation commitments are not met, a warming of 4oC could occur as early as the 2060s. If all the existing mitigation measures are implemented but without further commitment and action, the world is still likely to warm by 3oC within this century.

[1] WMO Provisional Statement on the State of Global Climate in 2012
http://www.wmo.int/pages/mediacentre/press_releases/pr_966_en.html