Are polar bears the only victim of the melting Arctic?

Following the news of the record-breaking low Arctic sea ice extent in August, the US National Snow and Ice Data Center (NSIDC) announced in early October that Arctic sea ice extent fell further to 3.41 million square kilometres on 16 September (Figure 1) and reached the minimum of 2012 as well as the lowest level since satellite record began in 1979. Studies in recent years suggested that the Arctic Ocean could become nearly ice-free in summer by 2030. However, some scientists warned that the summer sea ice could be gone in 4 years' time after a rapid decrease was observed this year. Why a rapidly warming Arctic with decreasing sea ice would be a cause for concern? After all, unlike polar bears, we don't live on Arctic sea ice. 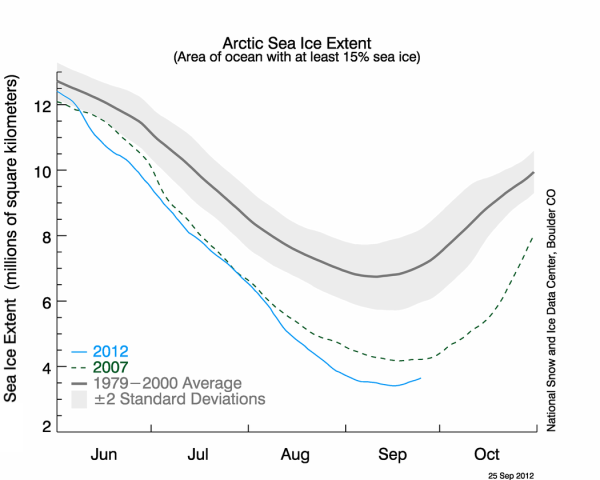 Sea ice is a very effective reflector of sunlight, helping to keep the Arctic cold. However, a warming climate in recent decades has caused the sea ice to decline, exposing the darker sea surface. Sunlight penetrates through sea water and warms the ocean, which in turn promotes further reduction of sea ice, forming a vicious cycle. A few years ago, scientists found that the rapid sea-ice loss could accelerate warming of inland area of the Arctic, raising concern of the thawing of permafrost[1] , or permanently frozen ground (Figure 2). Thawing of the permafrost will not only disrupt the infrastructure such as highways and houses built on the ground, but also release carbon dioxide or methane when the organic matter held by the permafrost decays. As both carbon dioxide and methane are greenhouse gases (the latter being much more powerful), they will add further warming to the globe on top of the human-induced one. A more recent research by NSIDC scientists predicted that about 30 to 60 percent of the permafrost, which took tens of thousands of years to form, would disappear by 2200[2] . The amount of carbon to be released is equivalent to half the amount of carbon that has been released into the atmosphere since the dawn of the industrial revolution. There are already signs of the thawing permafrost: observations show that methane is escaping from the seabed of East-Siberian Sea and Laptev Sea to the atmosphere because the "lid" of permafrost restraining methane stored in the seabed is perforated[3] .

A rapidly warming Arctic with decreasing sea ice can disturb the high- and mid-latitude atmospheric circulation in the Northern Hemisphere, causing more occurrences of extreme weather events, e.g. heat waves. In the United States, record-breaking temperatures appeared early this year with more than 15,000 warm temperature records broken in March. Each of the three months of spring (i.e. March, April and May) had average temperature soaring to the top three positions. Extremely hot weather covering large swath of the US persisted into July, making July 2012 the warmest on record dating back to 1895. Heat waves are normally accompanied by wildfire and drought. In June this year, Colorado experienced the worst wildfire in its history with 55,000 acres and more than 180 homes burnt down. In early August 2012, more than 50% of the counties in the US were designated as disaster areas, mostly due to drought. The World Bank issued a food price watch message in late August[4] when abrupt food price increases were triggered by droughts in the US and Eastern Europe (Figure 3). In early September, Oxfam International released a report entitled "Extreme Weather, Extreme Prices: The costs of feeding a warming world", highlighting that extreme weather events in a single year could bring about food price spikes of comparable magnitude to two decades of long-run price rises[5] .

The whole world is connected. What happened in the Arctic miles away can be a concern to all of us. We will continue to closely monitor the situation with the Arctic sea ice and the progress of global warming.