The Observatory issued the No.10 hurricane signal in the early hours of 24 July 2012 for Severe Typhoon Vicente, the first No.10 signal for 13 years since Typhoon York in September 1999.

As is well known, the Observatory staff work round the clock all the year through to fulfil their duties, be it No. 10 signal or black rainstorm.

And as I recently talked to several colleagues on duty that night during the No.10 signal for Vicente, their fondly re-told stories reminded me of the name of a movie - "Not One Less". Yes, we always would like to dig out the last piece of observation information available. To achieve that, the operational staff working tirelessly behind the scene were certainly all indispensable!


Sending up a balloon during the No.10 signal!

Sending up a balloon for upper-air sounding was undertaken at the Observatory since 1921. It used to be done manually. But with the introduction of the Automatic Upper-air Sounding System (AUSS) in 2004, balloon ascent had since entered into the era of hands-free release.

The AUSS at King's Park Meteorological Station will inflate and release the balloon at 8 a.m. and 8 p.m. daily. Suspended beneath the balloon are sensors that can measure pressure, temperature and humidity, with GPS tracking the position of the balloon as it rises through the atmosphere to gather upper-air information. Duty staff on the ground will receive and process the data using computers, and such information will be relayed to meteorological centres around the world after quality-checking. The frequency of upper-air sounding will be increased starting with the No.3 signal with additional ascent at 2 p.m. At the same time there will be a Senior Scientific Assistant or Scientific Assistant on duty at King's Park. We call this attending "Typhoon Duty". When tropical cyclone signal No.8 or higher is in force, upper-air sounding will be further enhanced with additional ascent at 2 a.m. as well. There will also be a Radar Specialist Mechanic on "Typhoon Duty" at King's Park.

The following was the hair-raising situation for the ascent at the time of the No.10 signal during the passage of Vicente, as recalled by Yeung Yu-shin (Radar Specialist Mechanic) and Yip Choi-hung (Scientific Assistant) who was on "Typhoon Duty" at King's Park.

Yeung: "As Vicente approached on 23 July, I already felt something was not quite right with the AUSS during the 8 p.m. ascent. I was telling Yip even then that we might have to be prepared for manual release."

Yip: "Throughout the night I communicated closely with Wat (Chief Supervisor Wat Kam-sing), who was on "Typhoon Duty" in the Forecasting Office at the Observatory Headquarters. Wat repeatedly told me to pay attention to personal safety and should only attempt manual release when circumstances allowed. After midnight, the No.10 signal was in force. When the time came for the 2 a.m. ascent, winds were howling outside. The AUSS failed to function properly, and the cover of its balloon launcher just could not be opened!"

Yeung: "Yes, it was raining and quite windy then. I ran outside to check things out, and found the mechanical problem could not be fixed within a short time. Well, a typhoon eye passing Hong Kong nearby is not something that happens everyday. As a professional, it would be a major regret if we could not get the upper-air information for this occasion. So we decided to switch to manual release right away. I monitored the reception of data on the computer. Yip worked on the balloon."

Yip: "I reported to Wat that we decide to go for manual release. Wat again asked me to make sure that it was safe before attempting the manual release. I considered the situation, though windy, would allow a manual release. So I was all dressed up for the stormy conditions, in full gear of raincoats, hoods, and wellies. I really struggled to hold on to the inflated balloon. To stay on my feet was itself quite a challenge as the winds and the balloon tried their best to drag me down. On the first attempt, the balloon simply refused to go up under the buffeting winds. On the second attempt, Yeung signaled that no data were received on the computer. On the third attempt, something was wrong in the data reception. It was not until the fourth attempt when the winds slightly subsided that the balloon was able to make the ascent and send back the observations successfully. Yeung confirmed that the information received on the computer was fine."

Yeung: "We finally breathed a sigh of relief. By that time, it was nearly 3 a.m., about an hour behind schedule. But at least, we managed to gather some valuable upper-air meteorological data (Figure 1). I trust the data will be very useful in the research of typhoons"

Yip: "Right, seeing those data, it was like finding treasures!"


Eye on the radar!

Weather radar is an important observation tool in the monitoring of storms, providing information on wind strength and severity of rainbands, as well as facilitating the location of tropical cyclone centres.

On the night of Vicente's passage, at the radar station on top of Tai Mo Shan, two Radar Specialist Mechanics Lee Ho-yin and Luk Ka-lok were on "Typhoon Duty", working hard to ensure the radar system was "cool" enough to function properly.

Lee: "Like other electronic equipment, the radar system cannot be over-heated. Otherwise, it will not function properly. On the night of the No.10 signal, the central air-conditioning system at the Tai Mo Shan radar station broke down. Ka-lok and I had to move all portable air-conditioners available to the radar room to ensure that the room temperature would not get too high. Fortunately, we were able to keep the radar system running normally throughout the night. The eye and circulation of Vicente could be clearly depicted on the radar images (Figure 2), as seen by the forecasters as well as by the general public."

Not so far away, another two Radar Specialist Mechanics Lo Wai-hung and Ip Wing-sing were on "Typhoon Duty" at the Tai Lam Chung Terminal Doppler Weather Radar (TDWR) station. Lo spent three days and two nights on watch at the Tai Mo Shan radar station when Typhoon York brought the last No.10 signal in September 1999. With memory of that experience still fresh in his mind, he had another No.10 signal story to tell thirteen years later.

Lo: "Some faults occurred causing the TDWR to cease operation. Even on such a stormy night, there were still aircraft landing and taking off at the airport, and the TDWR monitoring of windshear over the airport runways was even more crucial for assurance of aviation safety. It was really windy outside, and Ip and I had to combine our strength to get the door of the equipment room opened to get inside to work on the emergency repair. When the radar was back in normal operation, it was like getting rid of a heavy burden from our shoulders."


Words not enough in saluting our frontline staff!

After listening to several colleagues describing their work when the No.10 signal was in force during the passage of Vicente, I was much impressed by their unwavering belief in the need to maintain normal weather observation routines and their dedicated efforts despite the stormy weather conditions.

When I browse the web for weather observation information in future, or make use of such data for analysis and research, I will certainly appreciate even more that there is nothing trivial in obtaining a complete set of data. Indeed I have to say "thank you" to those working scrupulously on the frontline! 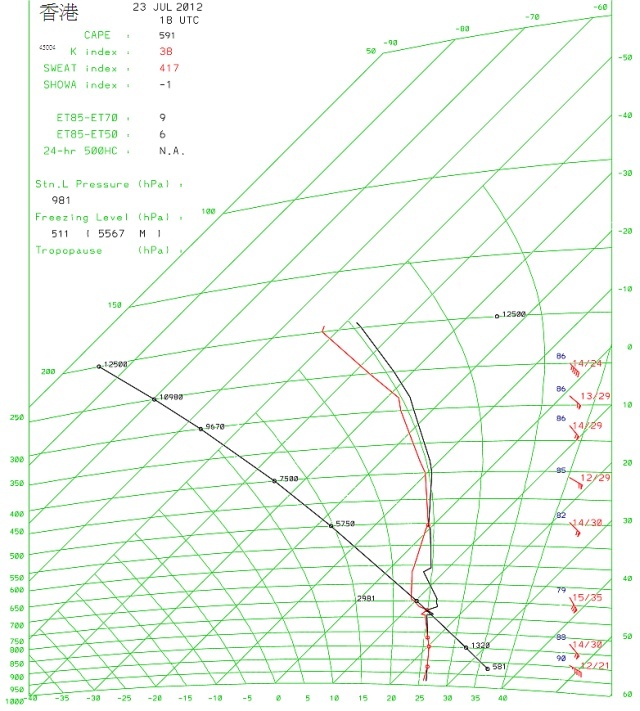 Figure 1Tephigram plotted from upper-air information as measured by the balloon ascent
in the early hours on 24 July 2012, showing changes in temperature, dew point,
wind speed and wind direction in the atmosphere aloft in the vicinity of
the eye of Vicente.