Recently, one of the hottest news in climate change blogosphere is on the new record low for the Arctic sea ice cover in late August 2012. The National Aeronautics and Space Administration (NASA)[1] and National Snow and Ice Data Center (NSIDC)[2 ] both have announced that the daily Arctic sea ice extent on 26 August 2012 shrunk to a new low of 4.10 million square kilometres, breaking the previous record set on 18 September 2007 (Figure 1).

Against the background of global warming, the Arctic sea ice extent has been decreasing over the past few decades. Besides the shrinking in area, recent studies also indicated that the sea ice in Arctic is getting thinner with less multi-year ice. This would make the sea ice more prone to melting out in summer.

The long term decrease in Arctic sea ice could have complex effects on the climate of the Northern Hemisphere. Since sea ice is a very effective reflector to sunlight, declining summer Arctic sea ice will expose more sea surface of the ocean to solar radiation. As water is less reflective than ice, the ocean will absorb more solar energy, resulting in a vicious cycle of warming up of the sea water and further reduction of sea ice (Figure 2). A warmer Arctic Ocean will also warm up the air and release more moisture to the atmosphere over the Arctic region. This would subsequently disturb the high and mid-latitude atmospheric circulation, increasing the chance of the occurrence of extreme weather events in both summer and winter in the mid-latitude regions of the Northern Hemisphere[3-4].

Since the Arctic sea ice usually reaches its annual minimum around mid-September, the sea ice extent is expected to drop further in September 2012 and the minimum extent for 2012 will likely be even lower than that of 26 August 2012 (Figure 3). This is indeed a worrying trend of global warming. The Fourth Assessment Report of Intergovernmental Panel on Climate Change released in 2007 predicted that the Arctic might become ice-free in summer by 2100. Taking into consideration of the recent trend, some modelling studies now suggest that the Arctic Ocean could be nearly ice-free in summer as early as 2030[5], much sooner than previously thought! 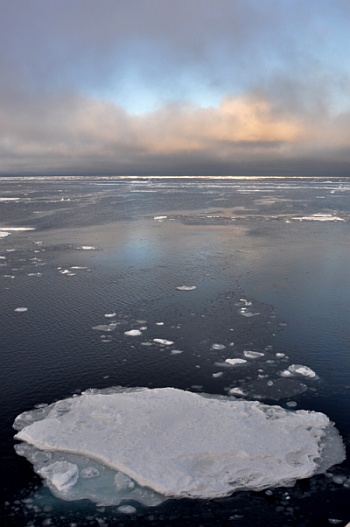 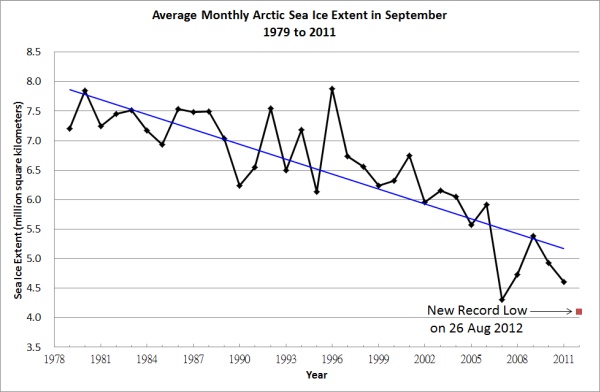