The unfortunate accident at the Fukushima Daiichi nuclear power plant triggered by the devastating earthquake and tsunami in Japan on 11 March 2011 hit the headlines for several weeks in a row. While we mourn the tragic loss of lives in Japan, some of us also worry about the possible effects that the transport of radioactive materials through the atmosphere can bring to Hong Kong. Now, with many weeks' worth of data on environmental radioactivity collected by the Hong Kong Observatory, we are in a better position to illustrate the effects of the accident.

In the Fukushima accident, the geographical distance of more than 3,000 km between the site and Hong Kong offers the best protection. Theories of atmospheric dispersion tell us that the dilution process over such an enormous distance will be so effective that even if the winds are blowing in our direction, the concentration of artificial radioactive substances reaching Hong Kong will be extremely insignificant. Moreover, with Japan situated at the higher latitudes under a belt of westerly winds aloft, it is just as likely that the radioactive substances released to the atmosphere will be blown eastwards across the Pacific in the first instance, in which case radioactive substances travelling through such a round-the-globe route before reaching Hong Kong will become dispersed and diluted further along the way.

Similarly, the vast expanse of ocean between Japan and Hong Kong provides a very effective buffer that helps to disperse and dilute any artificial radioactive substances transported by sea. It is also noted that the prevailing sea current near Fukushima is predominantly drifting towards the northeast. As such, the chance of sea waters in Hong Kong having a significant concentration of radioactive substance originating from Japan is extremely remote.


The Observatory as the sentinel in radiation monitoring in Hong Kong

Subsequent to the Fukushima accident, the Observatory soon stepped up its radiation monitoring efforts in Hong Kong. Air samples were collected at King's Park and Yuen Ng Fan every day, and analysed for their radioactivity content. Within two to four weeks after the first major release of radioactivity at Fukushima, radioactive iodine and caesium normally associated with nuclear power generation were successively detected in the air in Hong Kong. However, up to now since 14 April, artificial radionuclides were no longer found in the air samples in Hong Kong. 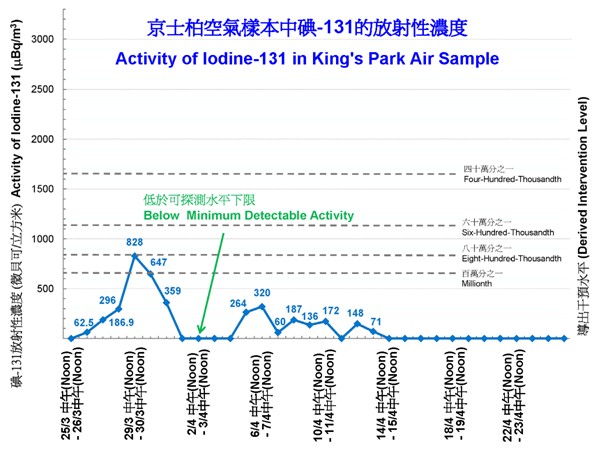 Figure 1Activity of iodine-131 detected in air samples in King's Park from late March to late April 2011.
(The concentration level required for taking protective actions is called "Derived Intervention
Level" (DIL) [1]. The DIL for inhalation of iodine-131 from the air is 661.38 Bq/m3.)

The Observatory's radiation monitoring not only tells us whether artificial radionuclides are present, but it also provides scientific data for ascertaining their likely effects upon Hong Kong. Here are the facts from the scientific data gathered:

For the purpose of putting such facts and figures in the proper context, here are some interesting comparisons:

The relative insignificance of the Fukushima-related radioactive dosage to Hong Kong can also be gauged from the schematic diagram below.

A full assessment of the impact of the Fukushima accident, like the one in Chernobyl, will require the hard work of scientists in the years to come. But for now, the scientific data clearly indicate that, despite the presence of artificial radionuclides in the air in Hong Kong for a short period of time, the amounts are so minuscule that there is practically no health impact to speak of. Nevertheless, the Fukushima accident, tragic as it is, does provide an opportunity for us to learn more about radiation and to review our state of preparedness. Ultimately, it is only through sound scientific knowledge and rigorous radiation monitoring that we can respond sensibly to any nuclear emergency.

2. Parts of the information are derived from the website of the Radiation Health Unit, Department of Health:
http://www.info.gov.hk/dh-rhu/english/html/understand_rad_english.htm