When should the No. 1 signal be issued

During the passage of Severe Typhoon Megi this month, there was some discussion in the city querying why the No. 1 Standby Signal was not issued sooner.

As given in the pamphlet "Hong Kong's Tropical Cyclone Warning Signals" for the public, the No. 1 Signal means that a tropical cyclone is centred within about 800 kilometres of Hong Kong and may affect the territory.

Thus, the No. 1 Signal may not be needed even when a tropical cyclone comes within 800 kilometres (km) of Hong Kong. For the signal to be issued, the storm has to have an effect, or impact, on Hong Kong. There had been many cases in the past where no tropical cyclone signal was issued even though the storm was well within the said distance, because the Observatory judged that it posed no threat to Hong Kong.

After entering the South China Sea, Megi came within 800 kilometres of Hong Kong at around midday, 19 October (Tuesday). It was however slow-moving and heading generally westward at the time. This westerly track across the South China Sea was predicted for the ensuing 24 hours (which was indeed largely the case). Such a track posed little threat to Hong Kong. 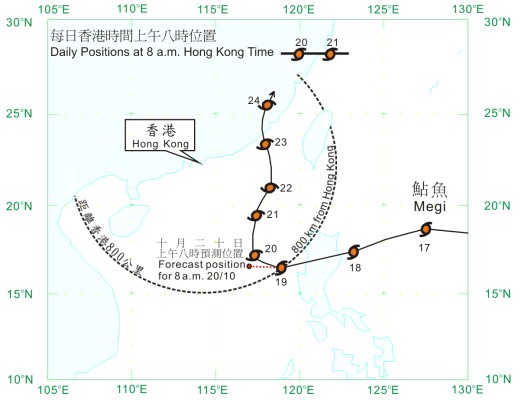 
It was until the daytime of 20 October (Wednesday) when the storm established a clear northerly track and picked up speed, heading towards the coast of Guangdong. As it was moving closer and started to pose a threat to Hong Kong, the No. 1 Signal was issued that afternoon. This was followed by the No. 3 Strong Wind Signal that next morning as Megi continued to near.

The next question of course is how to determine a storm's threat to Hong Kong. Several factors are considered, including: how fast the storm moves, whether it is moving generally in our direction, how intense it is (a tropical depression, a tropical storm, a severe tropical storm, a typhoon, a severe typhoon or a super typhoon), how extensive the storm's wind-belt is, as well as its predicted track and development.

This is no guesswork. As explained in my blog of 17 September 2010, Observatory colleagues have over the years developed various scientific tools to estimate tropical cyclones' impact on Hong Kong, such as how soon strong or gale force winds set in, and how the local wind changes direction according to the storm's position. They even allow us, in an indirect manner, to factor in the effect of winter monsoon if it is around.

We take all these into consideration when deciding on the No. 1 Signal. Issuing the Signal too soon, the livelihood and operations of some in the marine community may be affected. For a slow-moving storm, it may risk the signal being hoisted for too long. People's awareness may wear out, to the point that they may not be well prepared by the time the storm hits. Issuing the Signal too late, and we risk the loss of life and property. People's safety is our top priority during the decision process.

Mr. C.C. Chan, the Observatory's senior scientific officer, summarizes it well in a press conference the other day: the faster a storm moves, the sooner will the signal be hoisted.

Meaning of No. 1 Standby Signal : https://www.hko.gov.hk/tc/publica/gen_pub/files/tcws.pdf