There was a report of double rainbow observed in Hong Kong recently. It so happened that I talked about this phenomenon in an earlier blog (1 April 2010).

As if these are not enough, I received a photograph from a college alumnus showing three rainbows. The picture was taken in Shatin, New Territories, in June 2006, looking towards the west.

The explanation is that on top of the usual double rainbow (labelled '1' and '2' in Figure 1), we get another bow (labelled '3') because of reflection from the sea surface.

The weather that day was reasonable with some showers that morning, including a few millimetres of rainfall recorded in the area of Shatin. The time the picture was taken was before 7 a.m. Our record indicates that the Sun's position (azimuth) was 70 degrees from north. In the picture, the shadow cast by a building suggests that the Sun's elevation is about 11 degrees (or zenith angle of 79 degrees). The map in Figure 2 shows the Sun's orientation relative to the observer (i.e. camera). 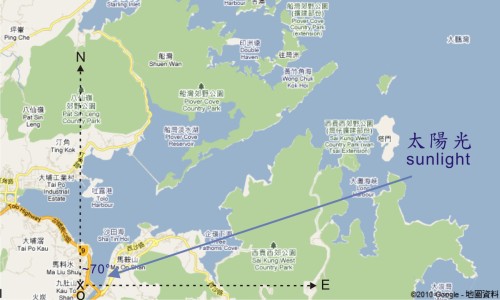 As explained in the blog of 1 April 2010, the primary rainbow (label '1' in Figure 1) arose from reflection inside raindrops. The colour band was formed from many raindrops at different places, where light rays coming out of the raindrops happened to reach the observer. In the process, a change of 42 degrees in the direction of sunlight was always involved (see the explanation later in Figure 3). The secondary bow (label '2' in Figure 1) was produced when the sunlight was reflected twice inside the raindrops.

The third bow (label '3' in Figure 1) was brought not directly by the Sun, but by sunlight reflected from the sea surface. Let's call this the reflection rainbow. The relationship between the angles is explained in Figure 3. You may notice that the primary and reflection bows have the same colour sequence, while the secondary bow has a reverse sequence.


Figure 4 presents a 3-dimensional view of what happened. 'A' in the diagram represents the region captured on the photograph that day in respect of the primary and reflection bow.


Reflection rainbow has been reported elsewhere around the world. But it never ceases to amaze, as shown by the example here in Hong Kong.