Atmospheric gravity waves (AGW) can trigger aircraft turbulence which is a major aviation hazard. AGW can be generated by various mechanisms such as airflow over mountains, by deep convection or by frontal systems. As AGW are characterised by their stripe-pattern, with advances in artificial intelligent in pattern recognition, use of satellite imageries for automatic detection of AGW is made possible.

The Hong Kong Observatory, in collaboration with NVIDIA, developed a deep learning model using the Faster Region-based Convolutional Neural Network (Faster RCNN) for auto-detection of AGW. The model was pre-trained with the Microsoft Common Objects in Context (COCO) dataset from Tensorflow Model Zoo. It is subsequently trained with Himawari-8 high-pass filtered water vapour geostationary satellite imageries with human-truthed AGW locations. It was then validated using another independent set of imageries. Preliminary results showed rather good model skill and an example is shown in Figure 1. 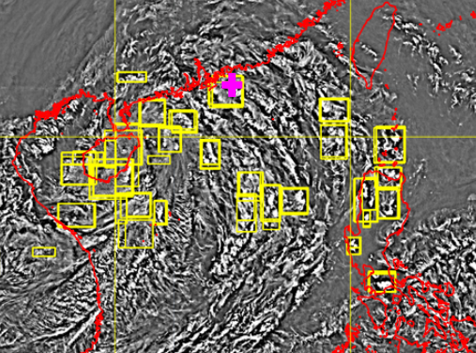