New names for tropical cyclones in 2021

Six new names, Yinxing, Co-may, Nongfa, Ragasa, Koto and Nokaen, have been introduced to the list of tropical cyclone names in the western North Pacific and the South China Sea in 2021 to replace the old names of Yutu, Lekima, Faxai, Hagibis, Kammuri and Phanfone respectively.

The new names were endorsed by the United Nations Economic and Social Commission for Asia and the Pacific/World Meteorological Organization Typhoon Committee at its 53rd session. The meanings of these six new names and the contributing countries are as follows:


According to convention, the Typhoon Committee will consider retiring the name of a tropical cyclone which has caused serious casualties and economic losses. In October 2018, super typhoon Yutu left at least two deaths and 133 injuries during its passage to Saipan. Electricity supply was interrupted in many places. Yutu also brought torrential rain and squalls to the northern part of the Philippines, triggering landslides and flooding, resulting in at least 20 deaths. In August 2019, Super typhoon Lekima caused at least 56 deaths and 14 missing in eastern China. Over 14 million people were affected with direct economic loss exceeding RMB 51.5 billion. Under the influence of the torrential rain brought by Lekima, there were at least two deaths and 11 injuries in Taiwan. Severe Typhoon Faxai and Super Typhoon Hagibis hit Kanto of Japan in September and October 2019 respectively, causing extensive flooding and power outage. Marine, land and air traffic in Kanto were paralysed. These two storms resulted in at least 102 deaths, 618 injuries and seven missing in total. In December 2019, the Philippines was hit by Super Typhoon Kammuri and Typhoon Phanfone in succession, resulting in a total of 54 deaths and 680 injuries.

The updated list of tropical cyclone names and their corresponding meanings is available at the Hong Kong Observatory website Tropical Cyclone Names in the western North Pacific and the South China Sea with effect from 1 January 2021. 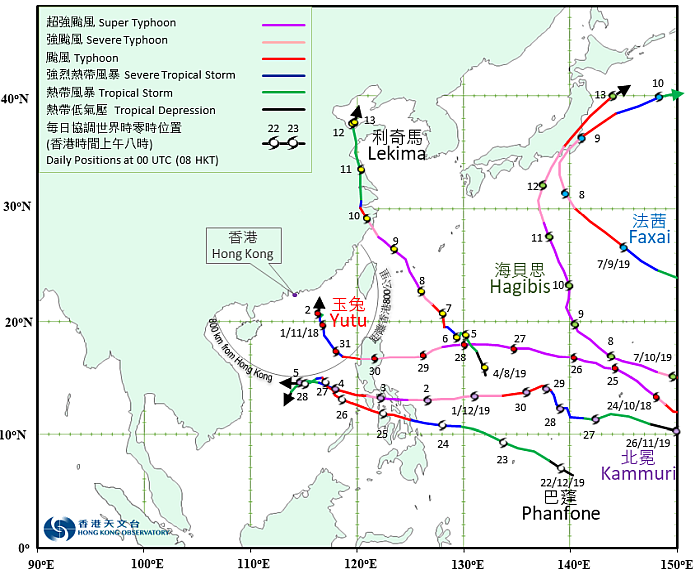