Hong Kong commenced to adopt a local numbered tropical cyclone warning signal system on 1 July 1917 to warn the public of the threat of winds associated with tropical cyclones. In the 1917 version, No. 1 was a Standby Signal, Nos. 2 to 5 signified gale force winds from four different directions (similar to the No. 8 signals nowadays), No. 6 signified increasing gales (similar to No. 9 signal nowadays) and No. 7 was the highest signal which indicated the threat of hurricane force winds (similar to No. 10 signal nowadays). In 1931, the signal system was revised to 1 to 10 with No. 2 and No. 3 signifying strong winds from two different directions (similar to the No. 3 signal nowadays), No. 4 being a non-local signal, Nos. 5 to 8 signifying gales, No. 9 signifying increasing gales and No. 10 indicating the threat of hurricane force winds. The system has been revised several times afterwards and the current tropical cyclone warning system is based on the version adopted in 1973 (Figure 1).

As the signal system has been revised during 1917 – 1941, when browsing historical signal information in that webpage, one should be aware that tropical cyclone warning of a particular number may have different meanings in different time periods. For example, the No. 7 signal between 1917 and 1930 was the hurricane signal, while the No. 7 signal after 1931 was the Northeast gale wind signal. Besides, it should be noted that tropical cyclones in the western North Pacific basin were not named before 1950s. In that webpage, a tropical cyclone ID (TCID) was assigned to each storm based on the year of occurrence and chronological order of the warning time. For example, 1917 #01 refers to the first tropical cyclone affecting Hong Kong in 1917.

Figure 1       Major evolution of the numbered tropical cyclone warning signal system in Hong Kong over the past 100 years or so.

Searching and Compiling the Signal Records

As the first step to retrieve the signal records before World War II, we started with the Observatory’s historical publication, the Monthly Meteorological Bulletin, which documented meteorological data of various stations in the Far Eastern Region, the synoptic pattern, and also the signal records in Hong Kong at the time (Figure 2). 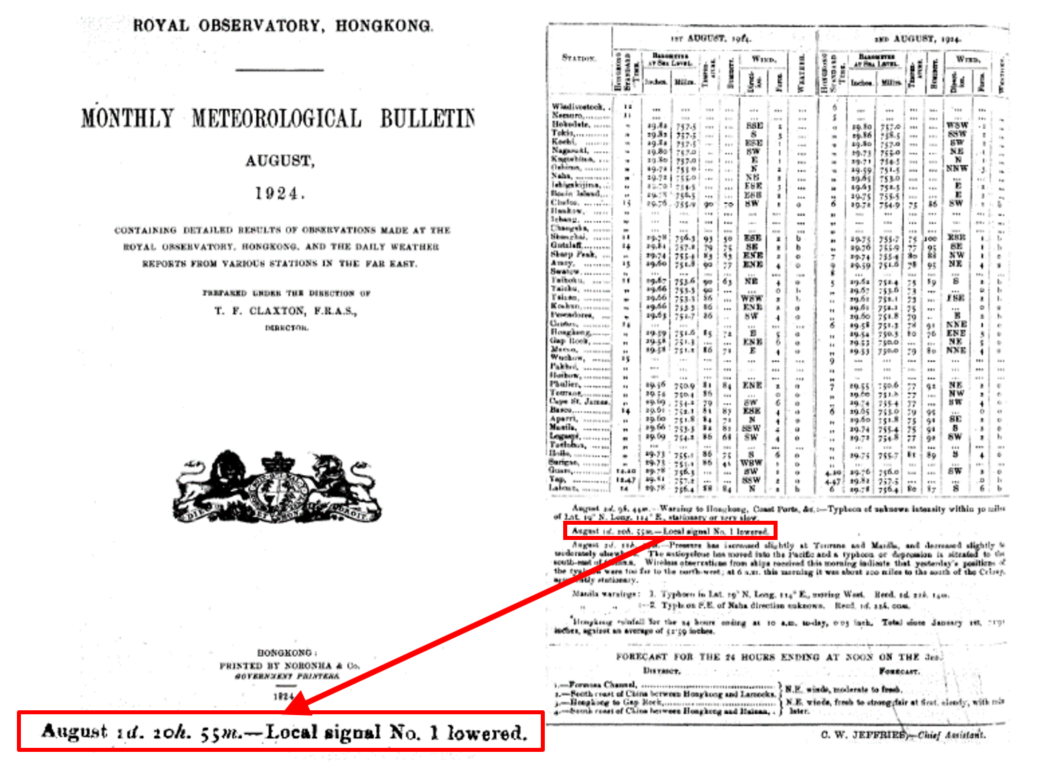 However, it will be rather time consuming to go through the records day by day. In order to consolidate the records more effectively, tropical cyclone track data (Figure 3) was utilized to assist in the search of records. By assuming that the hoisting of local signals should be associated with storms coming within 800 km of Hong Kong, we can narrow down the search to those dates with storms near Hong Kong and then search the corresponding historical documents of these dates. This greatly reduced the time required to locate the signal records. Besides, historical records are sometimes incomplete. Figure 2 shows that Signal No.1 was lowered at 8:55 p.m. on 1 August 1924. However, the hoisting time of the Signal No. 1 was missing in the historical documents of earlier time. This requires another source of information - the Chinese and English newspapers at that time. In this case, according to the South China Morning Post on 1 August 1924, the Signal No. 1 was hoisted at 3:25 p.m. on 31 July 1924. 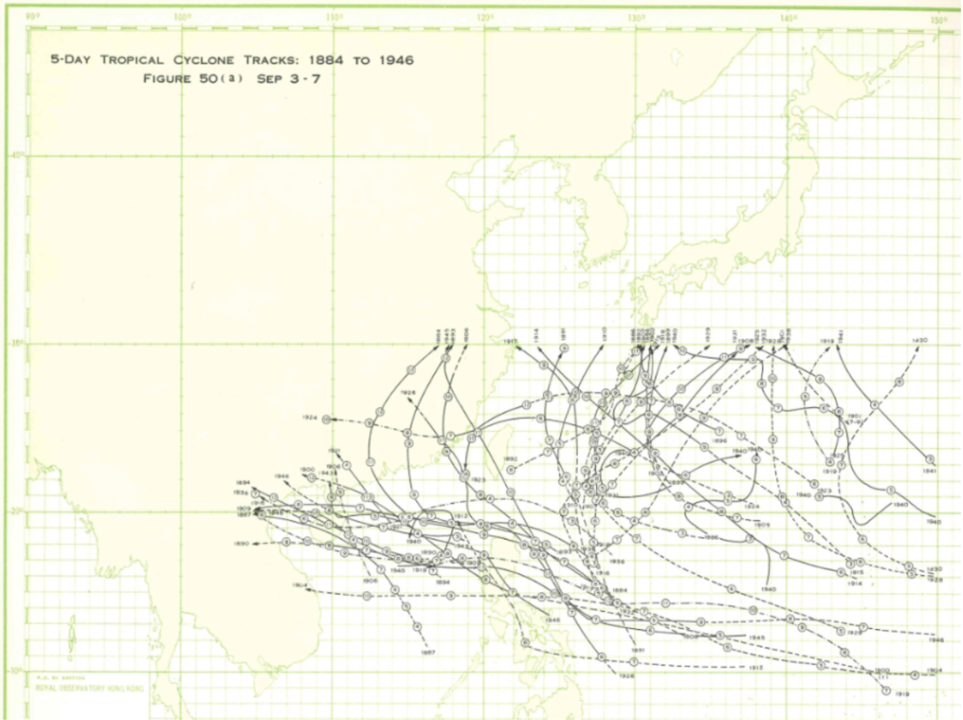 How to ensure the completeness of the records of hoisting and lowering of signals is another challenge. Fortunately, there is another source of information – the annual Report of the Director. Although these reports did not specifically list out the exact time of hoisting and lowering of each signal, it documented the number of times and the number of hours that the signals were displayed in a year (Figure 4). By incorporating this piece of information and compared with the signal information recovered, we can confirm that the recovered signal records are generally intact.

Figure 4       Report of the Director for the year 1932, documenting the number of times and the number of hours that the signals were displayed annually during 1928 – 1932. 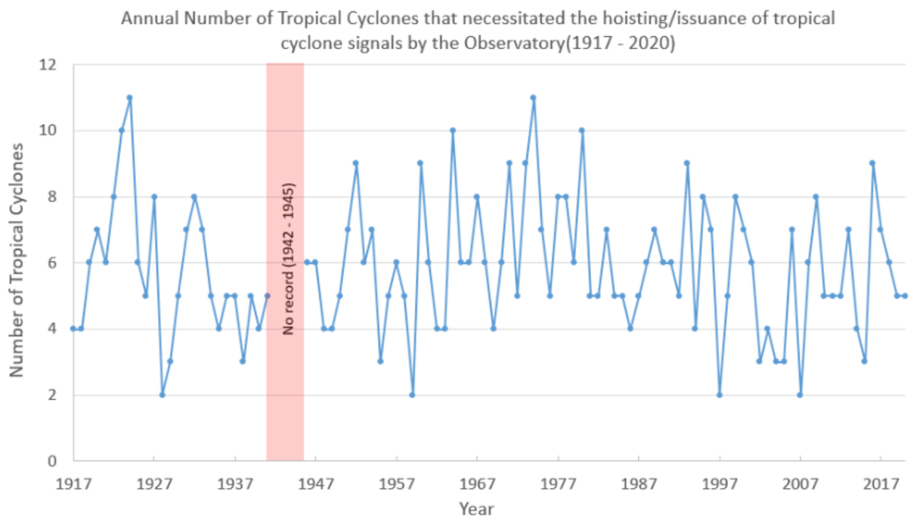 When reviewing the pre-World War II signal records, we should note that the tropical cyclone monitoring and forecasting techniques as well as the communication technologies at that time were much less developed as compared with nowadays. In the era without radar and satellite images, only sparse and sometimes delayed sea and land observations were available for forecasters to estimate the location and assess the intensity of tropical cyclones before World War II. In addition, there were no numerical weather prediction model to help predict the storm movement and changes in local winds a few days ahead. Moreover, the Observatory disseminated the tropical cyclone warnings to the public mainly by hoisting visual signals at various signal stations. All these factors may affect the number of times and duration of the warning signals at the time.