Climatologically, showery weather usually starts to affect the south China coastal areas in May due to the proximity of trough systems and the onset of southwest monsoon in the latter part of the month. However, in 2018, Hong Kong experienced an exceptionally hot and dry May under a spell of sunny and rain-free weather. A heat wave of 15 consecutive very hot days (maximum temperature at the Hong Kong Observatory reaching 33.0oC or above) prevailed over the territory in the latter half of the month from 17 to 31 May, by a large margin beating the previous record of 9 consecutive very hot days for May set in 1963. Rainfall in the month amounted to only 57.5 millimetres, less than 20% of the normal of 304.7 millimetres. The scorching weather and deficient rainfall in the month drew comparison to the disastrous drought requiring prolonged water rationing in Hong Kong in 1963.

Currently, the two main sources of fresh water supply in Hong Kong are rainfall collected from local catchment areas and water imported from Dongjiang, with the latter supplying about 70-80% of local demand. Table 1 compares the accumulated rainfall in Hong Kong and Heyuan, a station near the catchment areas of Dongjiang, from January to May in 1963 and 2018. As both Hong Kong and Heyuan are in the same climate zone, rainfall amounts between these two places are often highly correlated, experiencing drought / wet conditions at around the same time.

The driest year on record in Hong Kong was 1963 with an annual rainfall of only 901.1 millimetres. Rainfall in the first five months of the year was the lowest ever on record (Table 1). Similar level of rainfall deficit also occurred in Heyuan that year. In 2018, however, while the accumulated rainfall in Hong Kong from January to May was the second lowest on record, the rainfall deficit at Heyuan was apparently not as severe, a reflection of the high spatial variability in rainfall distribution that can exist even within a small region.

Since local rainfall and the definition of anomalous climate conditions such as drought may differ from places to places, the World Meteorological Organization (WMO) recommends adopting the Standardized Precipitation Index (SPI) to monitor the severity of drought conditions[1].

In gist, SPI is a normalized index representing the probability of occurrence of an observed rainfall amount when compared with the rainfall climatology at a certain geographical location over a long-term reference period. SPI is also designed to quantify rainfall deficit over different time scales (e.g. 3-, 6-, 12-, or 24-month rainfall), facilitating the analyses of drought impact on various water resource needs. For example, SPI for a period of 6 and 12 months (i.e. SPI-6 and SPI-12 respectively) or even longer reflects the longer term impact of drought on fresh water storage in reservoirs.

Never too early to save water

Figure 1 and Figure 2 show the variation of SPI-6 and SPI-24 in May for Hong Kong and Heyuan from 1953 to 2018 respectively. The extremely low SPI-6 values of less than -3.5 in 1963 and the less than -2.0 values of SPI-24 in 1964 in both Hong Kong and Heyuan clearly reflect the extremity of the prolonged and more widespread drought conditions in 1963 and 1964. The drought was eventually alleviated when Typhoon Viola affected Hong Kong and brought a total of about 300 millimetres of rainfall towards the end of May 1964.

Since about 80 percent of the annual rainfall of Hong Kong is recorded between May and September, whether 2018 will be as dry as 1963 of course very much depends on the local rainfall in the long summer yet to come. While the SPI-6 analysis for May 2018 suggests that the situation in Hong Kong borders on the extremely dry regime, the situation in Heyuan is graded as moderately dry and appears to be less critical. For longer term rainfall trend, the SPI-24 of both locations are still higher than the -1.0 level, basically within the near normal range.

Nevertheless, this is no reason for complacency as the rainfall situation in the context of drought avoidance can obviously change for better or for worse during the course of the year. The most sensible thing to do is to adopt good practice of water conservation irrespective of whether the year turns out to be wet or dry in the end. In the context of climate change, rainfall is expected to become more extreme and variable in the future. Therefore, we also need to stay vigilant and be prepared for the impacts of both extremes: heavy rain as well as severe drought. 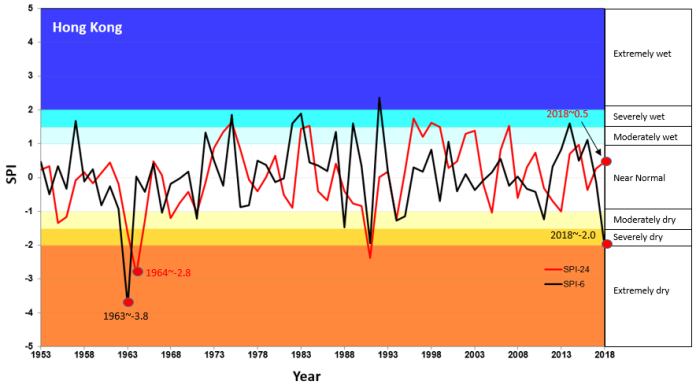 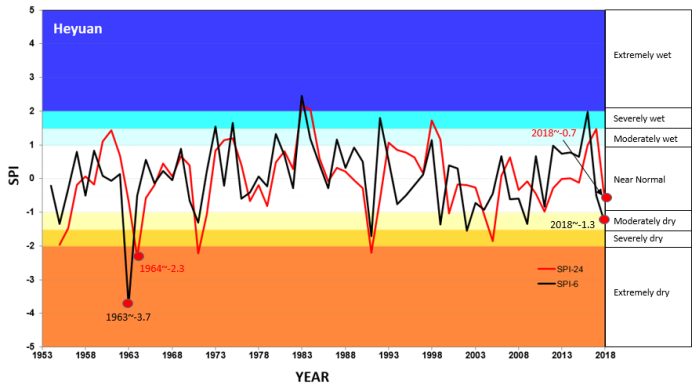