A 'shocking' Lunar New Year one hundred years ago

Shortly before the end of the lunar year in 2016 and 2018, two earthquakes brought severe damages and casualties to Taiwan and were felt in Hong Kong. However, the earthquake which caused the most severe shaking in Hong Kong in the Lunar New Year time was a magnitude 7.3 earthquake which occurred at 2:07 pm on the third day of the Lunar New Year one hundred years ago (13 February 1918). Its epicenter was located some 300 kilometres from Hong Kong near Nan'ao Island offshore of Shantou (Figure 1). It was the strongest tremor in Hong Kong in the past one hundred years or so, with an intensity of VI to VII on the Modified Mercalli Scale[1]. A number of aftershocks occurred in the two days afterwards. According to the Hong Kong Telegraph on 16 February, the most intense aftershock occurred shortly after 4 a.m. on 14 February. It was indeed a rather 'shocking' Lunar New Year for Hong Kong people in 1918. 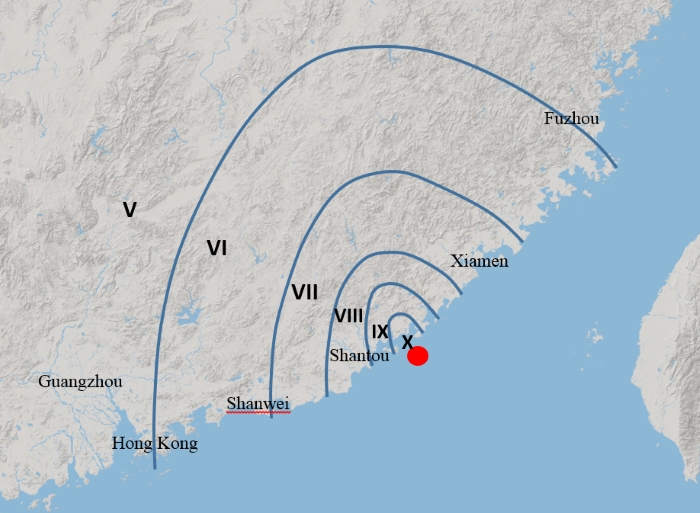 (based on information from "廣東和香港地震風險概論" by Ding Yuan-zhang, 2004, Commercial Press)

The earthquake brought severe damages and casualties to Nan'ao and Shantou. The China Mail of 18 February 1918 reported that practically every house in the native quarter of Shantou was demolished and the residences and buildings of foreigners were also severely damaged. A theatre full of audiences collapsed and not a single one escaped, including the actors. Big fissures appeared on the ground in many places, with hot water and steam coming out through many of these crevices. The earthquake also damaged some historical buildings - the Longmen Pagoda on a small island north of Nan'ao tilted with the top collapsed (Figure 2), and the top of the Memorial Arch in memory of Zheng Zhi-long (father of Zheng Cheng-gong) at Shen Ao of Nan'ao also collapsed. Furthermore, the Harbour Department of Hong Kong notified that the Lammocks Lighthouse near Shantou was also damaged by the earthquake. 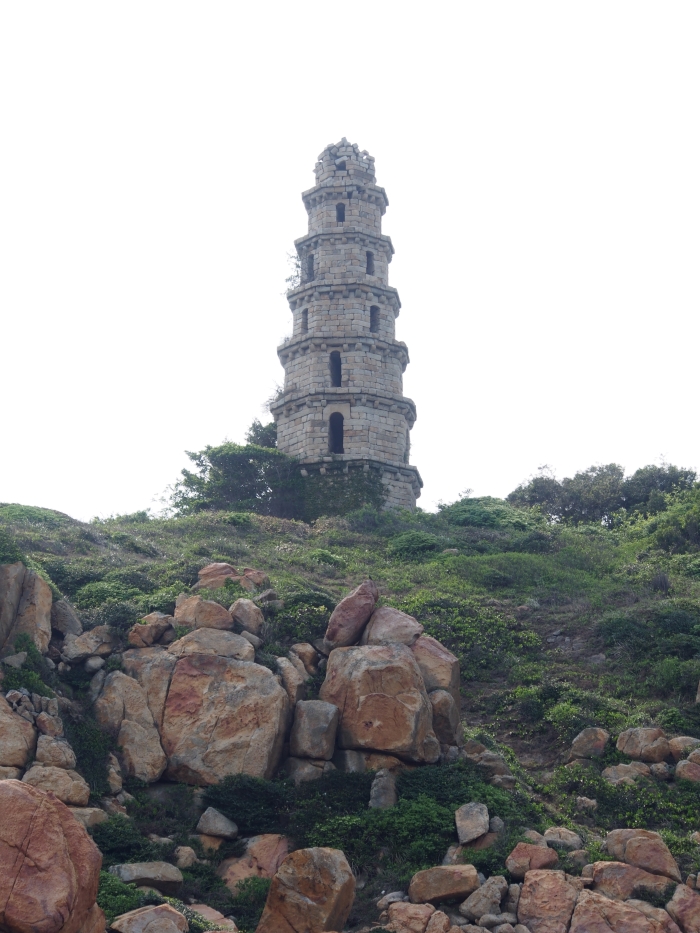 Figure 2. The Longmen Pagoda with the top damaged: one of the landmarks recording the Nan'ao earthquake (Source: Shun Chi-ming)

While the question whether this earthquake had induced widespread tsunami is still subject to further study, the following evidence suggests that it might have induced local tsunami due to underwater landslide so triggered: (a) the book 'Summary of historical natural disasters in Shantou and Chaozhou' recorded that during the earthquake, the ground shook and cracked with sea water roaring in Shantou, while tides appeared like rice soup in white at Fengshun; (b) the China Mail of 15 February reported that a ship 30 miles off Xiamen and sailing in 15 fathoms of water felt the shock distinctly, while another ship berthing at a pier in Shantou even touched the bottom, and (c) the archive of clergyman Hugh Anderson Moran had photos from an earthquake in China, which are believed to be associated with the Nan'ao earthquake[2], revealed many dead bodies lying on the shore (Figure 3). Figure 3. Photos from the archive of clergyman Hugh Anderson Moran on an earthquake in China (Source: Shun Chi-ming)

In Hong Kong, 14 locally felt earth tremors occurred on 13 and 14 February 1918 according to the records of the Hong Kong Observatory (Table 1)[3]. Among them, the one occurring at 2:07 pm on 13 February was the strongest with longest duration whereas the one occurring at 4:26 am on 14 February ranked the second, consistent with the two strongest quakes at Nan'ao during the period. According to Hong Kong Telegraph of 13 February, the shock was felt all over Hong Kong, and almost all the buildings were shaking. In particular, the earthquake threw the whole Central District into a state of panic. Hundreds of people rushed out of the shaking buildings and some women and children passed out in fright. The China Mail of 14 February reported that at Yaumati, a little girl was knocked down when people rushed out of their houses in terror, receiving injuries from which she died later.

The shock at 4:26 am on 14 February was also rather intense. According to Hong Kong Telegraph of 14 February, many citizens were awakened by the tremor. The Chinese Mail reported that several people hurt their legs when falling down from their double-deck beds, and morning tea diners fled from restaurants without paying their bills. 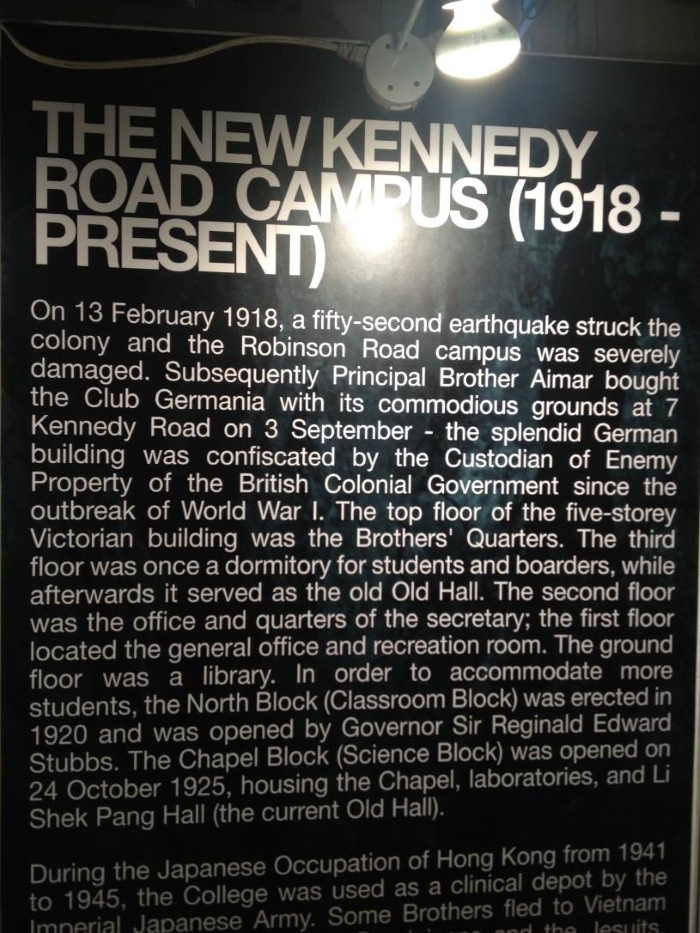 Figure 4. Memorial plaque in St Joseph College recording the then campus of the school at Robinson Road was severely damaged in the earthquake on 13 February 1918 and had to be relocated

Even though Hong Kong is not located within active seismic zone, it could still be affected by nearby earthquakes. The tremors in Hong Kong in the past several decades after the War were relatively minor with intensity V or below on the Modified Mercalli Scale. However, in view of the Nan'ao earthquake one hundred years ago bringing building damages and panic to the public, we should not be complacent but to learn from history and get prepared for future tremors. 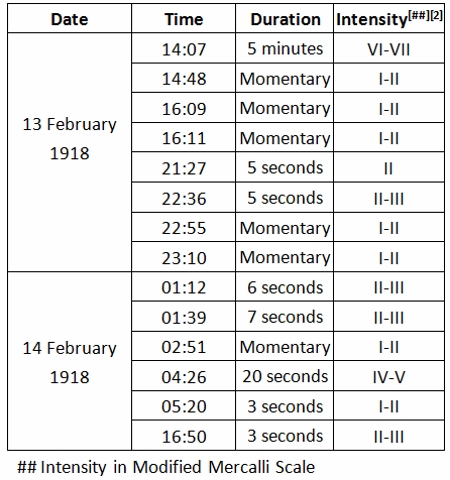 Remark:
[1] Modified Mercalli Scale - http://www.hko.gov.hk/gts/equake/mms_e.htm
[2] Clergyman Hugh Anderson Moran worked in China and the Siberia from 1909 to 1918. The earthquake records during the period show that only the Nan'ao earthquake could cause such a scale of casualty shown in the photos
[3] Report of the Director of the Hong Kong Observatory for 1918 (
http://sunzi.lib.hku.hk/hkgro/view/a1918/348.pdf) - the Rossi-Forel intensity scale, which is still being used at some places such as the Philippines (
http://www.phivolcs.dost.gov.ph/index.php?option=com_content&task=view&id=46&Itemid=101), was used in the report. The felt earth tremor at 2:07 pm on 13 February 1918 was classified as No.6 on the Rossi-Forel scale of 1 to 10, which approximately corresponded to intensity VI to VII on the Modified Mercalli Scale. The intensities for other felt earth tremors in Table 1, which are also shown on the Modified Mercalli Scale, were estimated from the intensity described in text in the report of the Director of the Hong Kong Observatory for 1918.
[4] The China Mail on 14 February 1918
[5] Hong Kong Telegraph on 13 February 1918
[6] Hong Kong Daily Press on 14 February 1918
[7] South China Morning Post on 14 February 1918