Weather is closely related to our everyday life. People often need to consult weather forecasts when planning various activities. With the popularity of the Internet and smartphones, we can now easily obtain weather information and forecasts from different sources for free. Actually how are these weather forecasts generated? 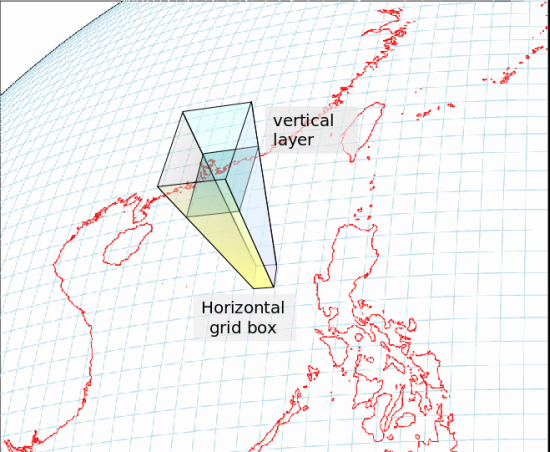 Figure 1Schematic of three-dimensional grids in a computer model.

Despite advancement in technology, computer models' accuracy is still limited by many factors, inter alia, the amount of observational data, model resolution and how well the computer model simulates different physical processes and the topography. Moreover, there are uncertainties pertaining to forecasting different weather phenomena. In general, it is more difficult to make accurate forecasts for fast-changing and small-scale weather phenomena (such as tornado, torrential rain and wind shear). Therefore, it is quite common to obtain different forecasts from different computer models. In fact, some models tend to forecast on the dry side while the other more on the cold side. Besides, models' grid points often do not coincide with the locations where the users are concerned owing to limited resolution of the models. As a result, major weather forecasting centres around the world will not directly use the initial results calculated by computer models, known as "model output", as their official forecasts. Instead, they will make adjustment to the model outputs based on factors such as their past performance, actual observations and forecast positions. Such process is known as "post-processing".

When the Hong Kong Observatory forecasts the weather, forecasters will make reference to different computer models. This includes the mesoscale model of the Observatory as well as models by the European Centre for Medium-Range Weather Forecasts, Japan Meteorological Agency, National Oceanic and Atmospheric Administration of the United States, China Meteorological Administration, Met Office of the United Kingdom, Korea Meteorological Administration, etc. These models may forecast different weather scenarios for the same day. This is particularly true on days where weather changes rapidly. There is no single model that can always perform better than the others, and all their forecasts need to be "post-processed" separately. Moreover, each model will be updated every several hours based on the latest observations. Sometimes even if a model forecasts certain extreme weather in Hong Kong, such prediction may not come up in the next update. If we use such direct model output from a single model as the official forecast, the forecast will be changing back and forth all the time and cause confusion. In order to judge which models are more reliable, forecasters need to consider multiple factors including models' past performance, stability, and how well they match with the actual observations. If we take tropical cyclone as an example, ensemble forecasts will provide many forecast tracks of a tropical cyclone (Figure 3). Some of the tracks may be close to Hong Kong, while some others far distance away. Forecasters need to analyze all the available information in order to judge which one is the most probable scenario. They should be neither too optimistic nor pessimistic. We found from previous verification results that such ensemble forecast method could effectively reduce the average errors of forecasts and improve the overall accuracy. However, it remains a great challenge to forecast extreme weather such as exceptionally high or low temperatures and torrential rain. 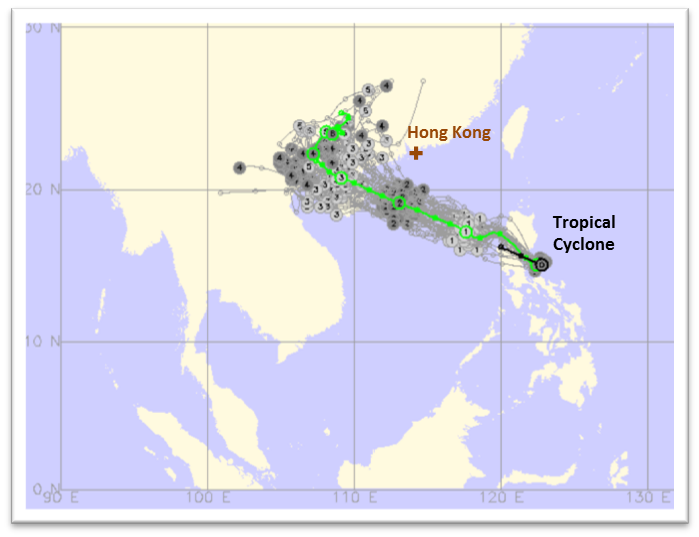 Figure 3Multiple forecast tracks (grey lines) for a tropical cyclone near the Philippines as predicted by ensemble forecasts. While some of them were very close to Hong Kong, some others remained rather far away. Green line shows the average of all the forecasts.

In recent years, there are numerous unofficial weather websites from foreign countries, which provide weather forecasts for different parts of the world. While they may be very convenient to use, it should be noted that most of them only use the direct model output from a single computer model (Figure 4). They neither consider alternative forecasts by other models, nor do they have enough observational data to perform "post-processing". Consequently, these forecasts may change drastically every several hours. Extreme weather events may appear in one forecast but not another, making them less reliable. If one has to use these forecast products, one should beware of their limitations, as well as their reliability and stability in the long run. Of course, it is advisable to obtain the official forecasts around the world, which is available at the World Weather Information Service.

Figure 4Comparison of forecast process in major meteorological centres worldwide and most of the unofficial weather websites from foreign countries.

With climate change, occurrence of extreme weather has become more frequent than ever. This makes perfect weather forecasts even more difficult even with the state-of-the-art computer models. One of the most important directions in forecasting technology development is the use of ensemble forecasts and probabilistic forecasts. With ensemble forecasts, forecasters can evaluate the chance of occurrence of various weather situations. This allows them not only to make their forecasts based on the most probable scenario, but also to use probabilities to articulate those that are less likely yet with potentially larger impact, for instance, "chance of heavy rain is 30%". One advantage is to get hold of various possible weather scenarios; the downside is that such forecasts may be mis-interpreted. For example, if the chance of rain is 10%, does it mean that we do not need to bring an umbrella? Before probabilistic forecasts are widely used, more efforts have to be made in publicity and education.