With a stronger than usual subtropical ridge persisting over southern China for most of the time in the month, July 2020 became the hottest month in Hong Kong since records began in 1884. The monthly mean maximum temperature of 33.3 degrees, monthly mean temperature of 30.2 degrees and monthly mean minimum temperature of 28.3 degrees were 1.9 degrees, 1.4 degrees and 1.5 degrees above their corresponding normals and all of them were the highest of the correspondingly monthly mean values on record. With a total of 21 hot nights, July 2020 was the month with the highest number of hot nights on record and the 11 consecutive hot nights that started from 5 July also set a new record for July. Moreover, there were 20 very hot days in the month, the highest number of very hot days in a month on record. With long spell sunny weather, the month was also much drier than usual. The total monthly rainfall was only 125.4 millimetres, about 33 percent of the normal figure of 376.5 millimetres. The accumulated rainfall for the first seven months of the year was 1088.8 millimetres, about 26 percent below the normal figure of 1473.3 millimetres.

Affected by a broad trough of low pressure and the subsequent southerly airstream, the weather of Hong Kong was a mixture of sunshine and showers with occasional thunderstorms on the first three days of the month. The showers were heavier on 3 July with more than 10 millimetres of rainfall over most parts of the territory. Dominated by an anticyclone aloft, apart from a few showers, it was generally fine and very hot during the day on 4 – 8 July. Under the influence of a strong southwesterly airstream, local weather became cloudier with isolated showers in the next two days.

With the subtropical ridge extending westwards from the Pacific to cover southeastern China, apart from a few showers, a spell of generally fine and very hot weather set in on 11 July and persisted till 30 July in Hong Kong. The intense heat also triggered isolated thunderstorms on 17, 21, 22 and 27 - 29 July. With plenty of sunshine and under light wind condition, the maximum temperature at the Observatory soared to 35.3 degrees on 23 July, the highest of the month. The unrelenting heat also necessitated the Very Hot Weather Warning to remain in force for 467 hours from 11 to 30 July, setting the longest record since the introduction of the warning in 2000. Meanwhile, the monsoon depression over the South China Sea gradually developed into a tropical depression on the last day of the month and its outer rain bands brought squally showers and thunderstorms to the territory. More than 20 millimetres of rainfall were recorded over most parts of the territory, and rainfall even exceeded 40 millimetres over Hong Kong Island. The oppressive heat and parched condition that persisted for over half a month in Hong Kong were eventually relieved by the windy and showery weather.

Two tropical cyclones occurred over the South China Sea and the western North Pacific in July 2020.

Details of issuance and cancellation of various warnings/signals in the month are summarized in Tables 1.1 to 1.4.  Monthly meteorological figures and departures from normal for July are tabulated in Table 2.

Warnings and Signals issued in July 2020 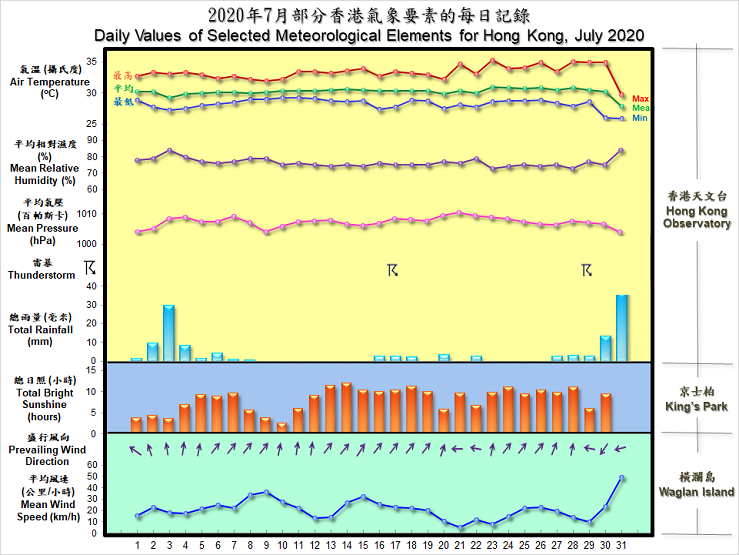 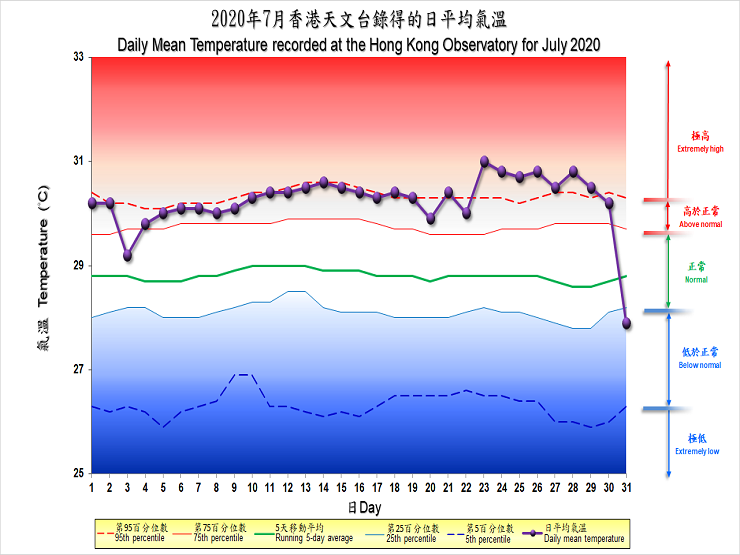 Extract of Meteorological Observations in Hong Kong for July 2020